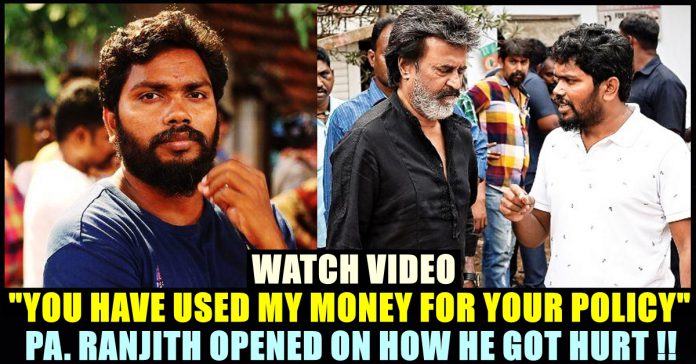 Director Pa. Ranjith is currently busy participating in interviews to promote his upcoming film “Sarpatta Parambarai” which talks about the battle between two clans “Sarpatta Parambarai” and “”Idiyappa Parambarai”. The filmmaker who debuted through “Attakathi”, in a recent interaction with Abishek Raaja of “Open Pannaa”, opened on how producer C.V Kumar scolded him through text message after watching “Attakathi”. Ranjith said that the producer felt bad for investing in the film as he believed that the film talks about the policies followed by Ranjith.

Ranjith made five films in Kollywood so far after debuting through “Attakathi” which was produced by C.V Kumar. After making “Attakathi” and “Madras”, the filmmaker got a golden opportunity to direct Superstar Rajinikanth back to back. He made a film named “Kabali” initially and went on to make “Kaala” by having the Super star actor in the lead role. His recently released “Sarpatta Parambarai” became a massive hit among the fans of Tamil cinema, despite of being a direct OTT release.

Talking about the film and his other perspectives, Ranjith revealed about how his first film producer felt after investing money on him. Abhishek asked Ranjith to talk about the loses he faced in his life after identifying himself as a filmmaker who raises voice for the oppresses. Answering to him, Ranjith said that he got the place he reached today, only because of talking about it. “I never cheated or lied to reach this place. I worked hard and believed in my art” the filmmaker said.

“Many advised me not to be particular about what I am talking about while I was doing my first film. I replied to them back asking why I shouldn’t be particular about it. I am going to tell them about who I am. I am going to tell them about what my life is about. I said that I will face the consequences. I believed that people would watch it if I tell my story in an interesting way” Ranjith said. “I tried it in all my films” he added.

“Even while doing my first film, I received criticism. The film was loved by many with equal number of people disliking it. I received criticisms for the film as well. After watching the film, many advised my producer C.V Kumar not to release the film and said it was too bad. C.V Kumar got hurt a lot, to an extend he sent me a message scolding me. He said “You have used my money for your principle. I have lost almost everything.” through the message and it did hurt me a lot. I wanted to give his money back by making the film reach. Everything changed when Studio Green watched the film through Venkat Prabhu sir” Ranjith said.