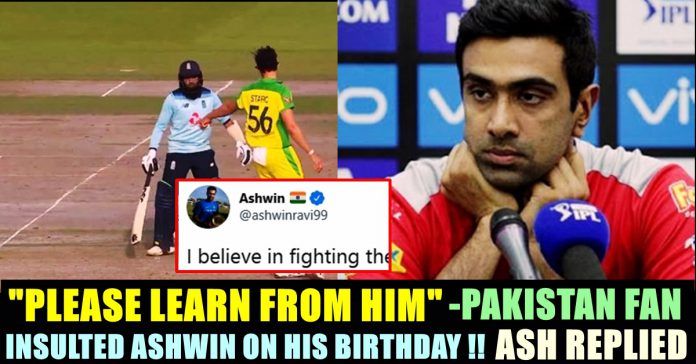 Chennai based Indian bowling all rounder Ravichandran Ashwin celebrating his 34th birthday on 17th of September. When the entire cricketing fraternity is wishing him the best on this special day, a cricket fan whose bio denotes that he is an ardent fan of Pakistan’s Wasim Akram, tried mocking him based on the controversial “Mankad” incident. However, Ashwin’s reply won the Internet as it received 10K and 500+ shares likes so far.

The fan posted the screenshot of Mitchell Starc leaving Adil Rasheed who steps out of crease before the ball getting released from Starc with a warning and asked Ashwin to learn something from the Australian bowler. The incident took place during the middle of 49th over where England was playing at 287/7 and was on the verge of putting up a massive total on board.

While Starc was coming to bowl the next ball, Adil Rashid was seen out of the crease. Instead of sending him back to the pavilion by “Mankading” him, Starc gave him a warning and asked him to go back to the crease. This gesture from him lauded by the Internet. However, the Pakistani fan who remembered Ashwin’s “mankad” incident in last year’s IPL, decided to take a dig at him by posting a tweet against him on his birthday.

“Please learn something Ashwin. This is how you play the game.” his tweet read.

Mankading has become a widely discussed topic ever since Ravichandran Ashwin pulled off the mode of dismissal for the first time in last year’s IPL to dismiss Rajasthan Royals’ Jos Buttler. The act from Ashwin evoked mixed reactions from fans and cricketing experts around the globe.

Ashwin received a fair amount of criticism from a certain section of the cricketing fraternity who believed his action to be disgraceful and against the spirit of the game while certain others believed that the off spinner must have at least provided Buttler a warning before running him out. Recently, former Australian captain Ponting who is currently acting a head coach for Delhi daredevils said that he won’t allow Ashwin to do it.

Now, on seeing the tweet from the pakistan fan, the Birthday boy came up with a tweet saying that he believes in fighting the good fight. He said that he will get back to him after celebrating his birthday. “I believe in fighting the good fight but wait till the day after and I will get back to you on this. I would like to give a day to myself.” the West Mambalam resident said.

I believe in fighting the good fight but wait till the day after and I will get back to you on this. I would like to give a day to myself.🙏 https://t.co/2LJufUNAnX

Check out some of the reactions for Ash’s tweet :

Lmao…. Starc just did it cause he was pissed… Because Rashid hit him for a maximum on the previous ball and his anger and frustration came out this way… He also attempted a bouncer on the last ball of the same over to Rashid but technically what Ashwin did was correct…

Ashiwin hope he is teaching you to do this. pic.twitter.com/a5G3kgEwMf