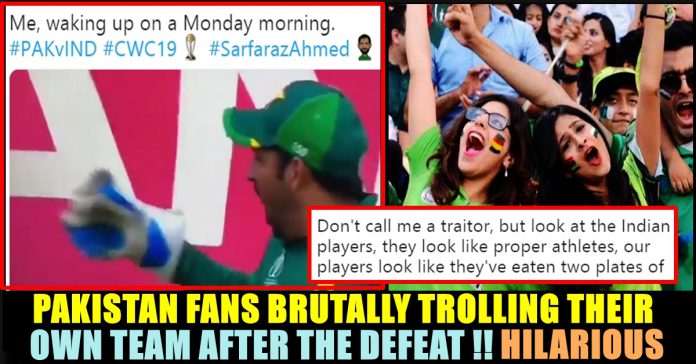 The opening pair of Rohit Sharma and KL Rahul gave India a solid start with a 100-run partnership, but they were lucky to be let off by Pakistan after a horrible mix-up in the middle when the score was still less than 50.

The ball was worked on to the off-side by KL Rahul and there was massive confusion over the second run as the two batsmen displayed the lack of understanding that comes with not playing together often, but fielder Fakhar Zaman threw the ball at the wrong end and the chance slipped away.

India smashed their neighbouring country Pakistan and defeated the rivals by 89 runs through DLS at Old Trafford. India scored a total of 336 runs for 5 wickets that includes the magnificent innings of Rohit Sharma’s 140 runs, Virat Kohli scored 77 runs and KL Rahul made 57 runs along with Hardik Pandya’s and Kuldeep Yadav’s magnificent spell dominated the rival team for the 7th consecutive time in the World Cup history. When Indian fans are celebrating the victory from all over the world, Distressed pakistan fans who got disappointed to see their team’s worst performences started to troll their own team players for various reasons. Check out some of them here :

after all Shoaib Malik scored more commercial airtime on our TV screens than runs on the board for this world cup.

THAT’S WHAT HAPPEN WHEN YOU PREFER EXPERIENCE OVER TALENT. SIFAARISH OVER MERIT.

Don’t call me a traitor, but look at the Indian players, they look like proper athletes, our players look like they’ve eaten two plates of waris nihari with feeqay ki lassi and benazir kulfa, all at once.

No they had fast food dinner yesterday night at Archie’s Manchester. pic.twitter.com/AEuo7zdR78

In days ahead you might witness few Cricket Journos making an attempt to save #SarfarazAhmed.👏 They’ll be putting all blames of #cwc19 failure on Wasim Mani Inzi Mickey Flower Azhar & all other non-Karachiite PCB Officials but wont rectify loopholes in captaincy of Sarfaraz!!🏏

A captain should lead from the front, lift his team when situation is difficult but sorry to say with this body language and personal performance you don’t need anyone else to do any lobbying or conspiracy against you #SarfarazAhmed, you are enemy of your own. #IndiavPakistan pic.twitter.com/UzfVx0ZwvC

What do you think on these hilarious posts ?? Comment your views below !!