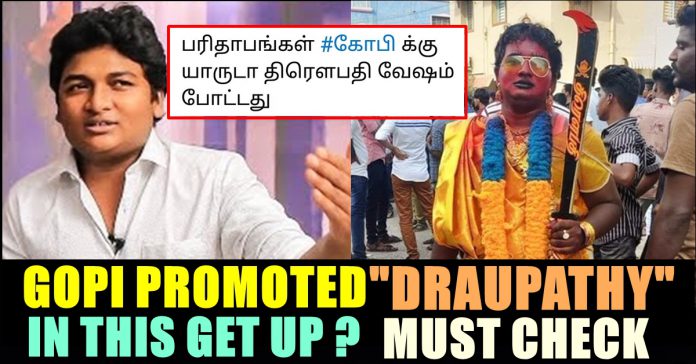 Gopi who is popularly known as “Parithabangal” Gopi has now cleared air on a meme related to him which is doing rounds since the release of controversial “Draupathy” movie. Gopi rose to fame through his youtube sketch videos along with his friend Sudhakar, said to his followers that he is not the one who supported “Draupathy” with a weird attire on the first day of the film’s release.

The viral meme had a guy similar to Gopi holding a long artificial sickle written “Draupthi” on it. He also seen wearing a saree and garland. His picture went extremely viral in social media platforms and many started mentioning Gopi and questioned him. Check out some of the comments here :

Draupathy film released in theatres on 28th of February and is being reviewed by the Netizens. The film which has actor Richard in the lead role became a subject to controversy since the trailer of it released. The “Pazhaya Vannarapettai” fame Mohan directorial is highly believed to be a cast based low budget film against a particular community is facing severe criticism across the internet.

So far BJP supporter H.Raja watched the film in a special screening and promoted the film. Actress gayathri Raguram also promoting for the film constantly. Makers of Draupathi are promoting the film by saying that the film targets the audience of B and C centres. They also highlighting the term “Naadaga Kaadhal” and saying it will expose the people who are luring women to get their money and properties.

Even after making the clarification, Gopi got trolled by his beloved followers in a friendly manner in the comment section. Check out some of their reactions below :