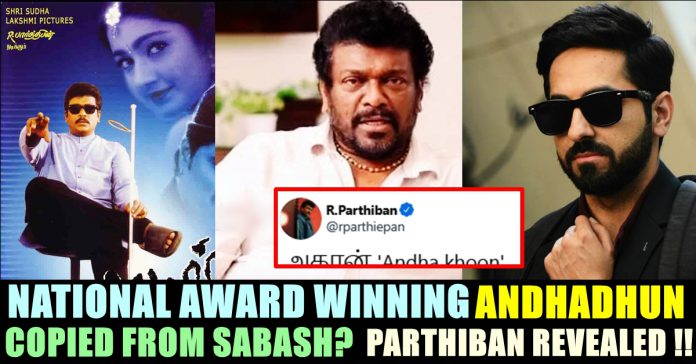 Andhathun won National awards for several categories in the 2019 National awards. The film is a 2018 Indian black comedy crime thriller film that was co-written and directed by Sriram Raghavan. The film starred Tabu, Ayushmann Khurrana and Radhika Apte, and tells the story of a blind piano player who unwittingly becomes embroiled in the murder of a former film actor.

Now, the movie is going to be remade in Tamil with Top Star Prashanth. Father of the actor Thiagarajan has bagged the Tamil remake rights of Andhadhun, and he is all set to cast his son Prashanth in the lead role of the film. They have remade Sriram Raghavan’s Johnny Gaddar as Johnny in tamil which turned out as a huge flop at box office. Now how would you feel if we say that Andhadhun is inspired from a vintage Tamil movie.

Director Parthiban who released Oththa Seruppu lately, is very much active in social media platforms, especially in Twitter. The actor who enjoys more than 14 lakh followers in Twitter often interacts with them. Recently one of his follower asked when he is going to make the sequel of his earlier film “Sabash”.

The film “Sabash” revolves around a blind man played by Parthiban. The Hollywood style film has similarity with Sleuth where two people pitted against each other. The mystery thriller is about who killed the wife of the protagonist who loses his eyesight in an accident. Similar to Andhadhun, in the end it will be revealed that the protagonist is not a blind and he pretended it all along.

When the followed asked Parthiban about the sequel, the director indirectly hinted that there was already a sequel made. Instead of dubbing it as “Andhadhun”, Parthiban wrote “Andha Khoon” to make his followers understand.

Here’s how the follower asked him about the sequel :

This reply from the filmmaker ringed the bell of few of his followers who understood what he is saying.

Parthiepan is known for having directed critically acclaimed films such as Pudhiya Paadhai and Housefull won the National Film Award for Best Feature Film in Tamil. In most of his films, Parthiban is a hero who makes jokes and always has a touch of humor with actors and comedians.

What do you think on this reply from the filmmaker ?? Comment your views !!