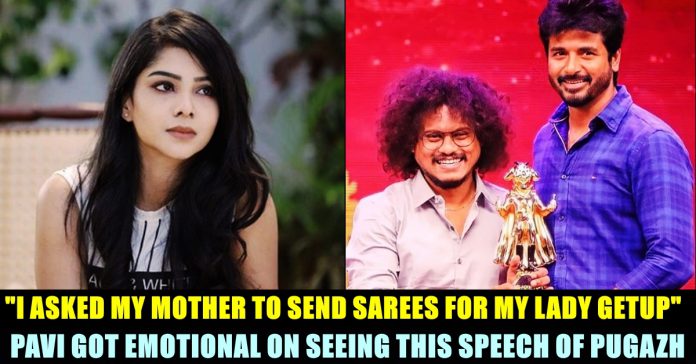 Pavithra Lakshmi of “Cooku with Comali” shared a video in her Instagram story saying that Pugazh will reach heights after seeing a speech of himself in front of actor Siva karthikeyan and many other celebrities in the award function conducted by Black sheep youtube channel. In the video Pugazh described how he managed to get sarees from his mother during the days when he had to appear as female in comedy shows.

Pugazh who came to Chennai from Cuddalore, initially participated and performed in “Sirippuda” show during 2016. However, the much awaited break for him came after he started participating in “Cooku with Comali” show of Vijay TV.

He gained a huge fame through his humorous one liners and reactions in the cookery show which gives rooms for the comedians. The aspiring actor is already enjoying a separate fan base in social media platforms. Now, a recent video here uploaded in his youtube channel after buying a car is going viral among the Internet users.

Recently he bought a new car and received blessings from his followers by uploading a video in his official youtube channel. Now, the comedy actor received an award from Sivakarthikeyan in Black Sheep Digital Awards. While receiving the award Pugazh talked a few awards about the path he came through to reach the height.

“When I was playing lady roles in the past, while talking to my mother in phone, she would ask me whether I want biscuit or any kind of sweets. I would say that I want a saree and inner skirt of her. She got surprised and I said that I couldn’t buy it from the shops outside” Pugazh said in the award function.

This video garnered huge response from the fans of Pugazh. Pavithra Lakhmi who recently got eliminated from the “Cooku with Comali” show, saw the video and shared it in her official twitter account by calling Pugazh as “Darling”. She said that his hard works will take him to the heights by writing “You are a hero always darling, Your hardworks will keep taking you heights” in her story.

In a recent live interaction with her Instagram followers, Pavithra Lakshmi said that not only herself, every girl would have a crush on Pugazh as he is making people always laugh. The combination of Pugazh and Pavithra has a separate fan base as well.