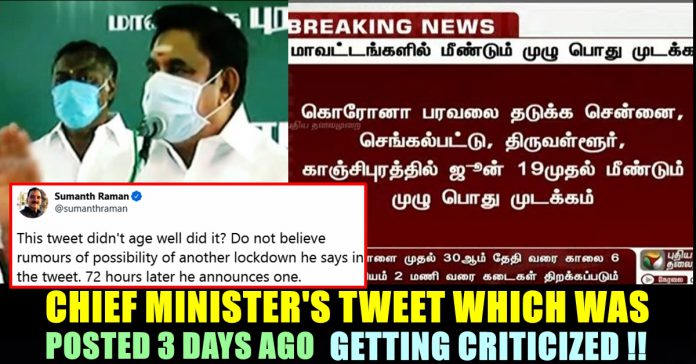 Not many days ago, Chief minister of Tamil nadu Edappadi K Palaniswamy denied the news on norms of lockdown getting tightened, today announced that complete lockdown will be implemented in four districts of the state. During his earlier press meet, honourable Chief minister said that legal actions will be taken against those who made false statements regarding lockdown in Tamil nadu.

Complete lockdown in Chennai, Thiruvallur, Kanchipuram and Chengalpet is going to be implemented from 19th of June to 30th the same month. The decision was taken during a cabinet meeting and was officially announced on Monday. It has been reported that health experts which held discussions with Tamilnadu Chief minister Edapadi K Pazhaniswamy today recommended tightening the relaxations given for lockdown in Chennai to contain the spread of Coronavirus infection.

During the complete lockdown, Grocery shops, petrol bunks and mobile markets can function between 6 AM and 2 PM. People who are using their own vehicles to visit market, are allowed to travel only 2 Kilometres from their house. Only essential services and medical emergencies will be permitted in the four districts. Banks allowed to function only on June 29 and June 30 with 33 per cent workforce. ATMs will be open all throughout.

Hotels will be allowed to function from 6 am to 8 pm only for takeaway services. E-passes will be issued for people requesting to travel out of Chennai only for weddings, deaths and medical emergencies. Courts and media will remain functional. Amma Unavagams and community kitchens will be open during the complete lockdown.

However, this announcement from the government has instigated people to raise question against the statement made by the chief minister 3 days ago. “I myself seen this news on Whatsapp. It is not at all true.The news on the norms of lockdown is going to be tightened by me is absolutely fake.” said Edappadi K Palaniswami while addressing the press who went on to post a tweet regarding the same. “There were rumors surfaced in social media stating that I have extended the lockdown period. The news is absolutely fake. I ask people not to believe such rumours. Legal actions will be taken against those who spread such news” his tweet which was posted on 12th June read.

Now people are questioning about the contradiction between the two announcements in a time span of just 3 days. However, many had a sigh of relief on Government’s realization on the importance of lockdown at this situation. Check out some of the reactions below :

Been telling for a long time, never relax #lockdown based on the calendar days elapsed since the imposition of #lockdown , but based on the active cases, as it is done in rest of the world..

Finally, #India is listening.. #Chennai does it..#Mumbai and #Delhi should follow..

This tweet didn't age well did it? Do not believe rumours of possibility of another lockdown he says in the tweet. 72 hours later he announces one. https://t.co/eBKabiXTaV

People are requested not to rush the shops in coming days to buy stocks. Shops will be available from 6AM to 2PM during the complete lockdown. Comment your views on this announcement made by the government !!