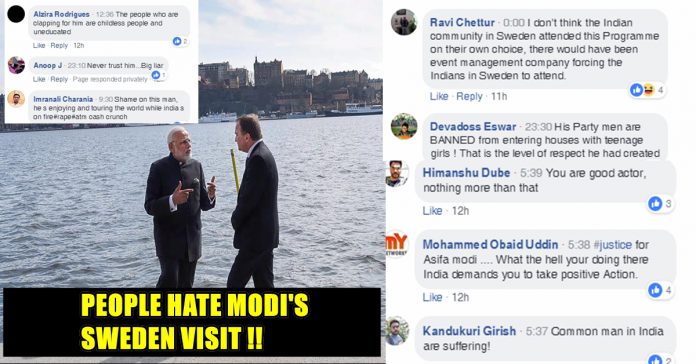 Prime Minister Narendra Modi, who was in Sweden yesterday, addressed the Indian community in Stockholm after a busy day which saw him attend ten top-level meetings in ten hours. In his speech to the Indian diaspora, PM Modi said India is going through a period of change, and the government in the last four years has worked very hard towards building a developed and inclusive country. The event, which saw a packed house, was held at Stockholm University.

PM Modi went on to highlight the initiatives taken by his government towards the upliftment and empowerment of the poor. In his speech he criticized previous governments saying, “Earlier, removing poverty was just limited to words and slogans” thereby suggesting that it was just about lip service. He went on to say that it was his government that “is committed to poverty alleviation and was using empowerment as a tool to achieve its goal. We are working day and night to ensure we achieve this,” he said.

There was so many cruel rape assaults are taking place in India such as a 8 year old girl named Asifa was gang raped by 8 Kathua men inside temple and a 18 year old girl who belong to Unnao was allegedly raped by BJP MLA. Modi addressed the Kathua rape case after so many days and he remains silent still in Unnao rape case. His speech in Stockholm, Sweden went on air in social media page called The Quint which has almost 6 million followers where he addressed so many things such as India’s stature increase manifold at the world stage. But people does not seems to enjoy his speech. So many cruel comments kept on flowing which showed the unhappiness of the people on the ruling of the Prime minister. Earlier, Swedish Prime Minister Stefan Lofven received Modi at the airport. Modi, who is on the first leg of his five-day foreign tour, will also travel to the UK where he will attend the Commonwealth Heads of Government Meeting.