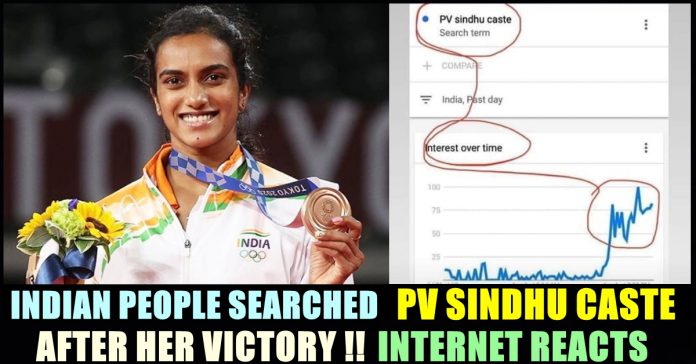 Reports emerged saying that people of country India are keen on knowing about the caste of the country’s star badminton player PV Sindhu who became the first Indian woman and second Indian to win two individual medal at the Olympics. The search term “PV Sindhu caste” became the most searched topic about the athlete, said a report. PV Sindhu won Bronze medal after beating China’s He Bijangjiao at 21-13, 21-15 on Sunday at the Tokyo Olympics Games.

Sindhu also achieved the milestone of becoming the fourth all time female shuttler in all of Olympic to win medals in back to back games. The star player for the country completed the match within 53 minutes and won the medal to receive accolades from all over the world. After winning, PV Sindhu thanked fans, well wishers and her coach.

While celebrating the victory of the 26 year old, most of the Indians couldn’t resist themselves from knowing about the caste details of the athlete. One of the most searched term followed by her win for PV Sindhu was her “caste”. According to reports, the term witnessed a 700% increase in searches.

According to News 18, Andhra and Telangana tops the first two spots in searching the term “PV Sindhu caste” followed by Haryana, Puducherry and Delhi. Sindhu faced similar situation when she won silver at Rio Olympics. Even, people were interested know about the caste of Hima Das, the first Indian athlete to win Gold medal in the women’s 400 metre event at the IAAF World U-20 Championships.

Check out some of the other reactions in social media below :

After PV Sindhu's victory, the most searched thing was 𝗛𝗲𝗿 𝗰𝗮𝘀𝘁𝗲

This shows the obsession with castes and not with capabilities. From politics to daily life, " good people are ignored if not from same caste, & even criminals become idols if they're from the same caste " pic.twitter.com/U8pwDiaf3y

ALWAYS! Less than 24hrs of winning the 2nd consecutive medal at the #OlympicGames , people are searching for #PVSindhu’s CASTE AGAIN! Happened last time too.
Next would be Telugu states fighting over her, both CMs trying to beat each other announcing rewards. ఎప్పుడు మారతారో🤦🏽‍♀️ pic.twitter.com/nI0EDGQuJm

PV Sindhu’s caste was the most searched thing after she won the bronze medal, reports @CNNnews18. This goes to show the inherent casteism present in one’s mindset!

#PVSindhu and the interest in knowing her caste is a never ending story.

Everytime, the champion performs in an international stage, the search trend shows a spike.#Badminton #Sindhu https://t.co/Ri1D7ZtRWw

And images of *PV Sindhu at temples*
This country doesn't care about Victims, criminals and winners.
Only their caste, religion, their political stands and beliefs. https://t.co/VgXu8iKzhu

Discrimination based on caste was banned by the law in country India years ago and the caste system in India was formally abolished in the year 1948. However, people continue to show their obsession over caste as a result of which humiliations, violence and killings are taking place in the rural parts of the country till today. People use caste to dominate one another and the latest Google trends is probably one of the best examples to prove it.