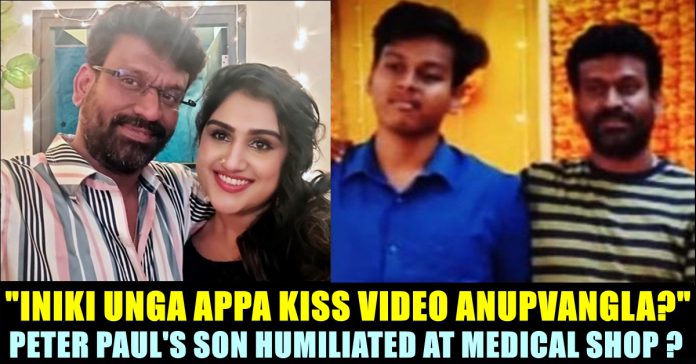 While replying to the allegations made by Vanitha Vijayakumar in the latest press meet, Producer Ravindran said that Peter paul’s son got humiliated in a medical shop. He who looked visibly angry, said that he won’t give anymore interviews about Vanitha Vijayakumar and requested media peeple not to approach him regarding Vanitha issue. He also made a self introduction to the audience to make them get a clear picture of his occupation.

Initially Ravinder called out Vanitha for ruining a family of a woman and two children. In a way of countering his accusations, Vanitha Vijayakumar called him personally and said that she wants to talk with him. Ravinder who refused to talk to her as it was Sunday, gave an interview to media the next day. In his interviews, he can be seen playing the audio recordings of Vanitha Vijayakumar to answer to them one by one.

On Tuesday, while addressing to the media, Vanitha said that Ravinder became famous only through his youtube videos, not through producing films. “He produced one or two films but very much known only for his videos in youtube. He who behaves like my relative or like my opposite party lawyer, went too personal. When I contacted him personally, he didn’t bother about it and started behaving rudely and gave many more interviews to media against me” said Vanitha Vijayakumar.

Further Vanitha demanded Producers council to expel Ravinder. At one point she who seemed visibly frustrated asked whether Ravindran is even a man. “Is he even a man ?? Is he even a male ?? He is threatening to break my face and calling me as “Akka”. Producers council must expel him. He must not make movies. Who is he to talk about my personal matter ?” she asked. Read : “Suriya Devi Is A “Ganja” Smuggler” – Vanitha’s Lawyer !!

Replying to her allegations, Ravinder, in his recent live video had said that protecting the woman of his own is called as “Male”. “In that way, I am a man” said Ravinder who said that Vanitha is the one who made his video go viral by replying to him. “I am not that normal category to keep mum to your offensive words. As everyone, I have my own dignity to reply to those. I wouldn’t have made the news if she ignored me in the first place, but she expects me to be afraid of her. Why should I ??” Ravinder asked.

Ravinder also said that he intervened in this issue only because of Elizabeth, wife of Mr. Peter Paul who said that she doesn’t know how to confront a cinema personality like Vanitha Vijayakumar in one of her interview. “Peter Paul’s son is in contact with me till today. He got humiliated in a medical shop where he was asked whether his father would send a “kiss” video for that day. He cried to me and said that he feels like committing suicide. What should I tell him ?? Do I supposed to ask him to commit suicide ?” the Producer said.

The film producer further said that he won’t give interviews talking about Vanitha hereafter but assured justice for the family of Peter Paul. “I won’t be the reason for a woman’s tears. I give up now but I know how to save her (Elizabeth) and her children. I will take care of that. You proceed with your legal actions against me, I know how to handle it” he added.