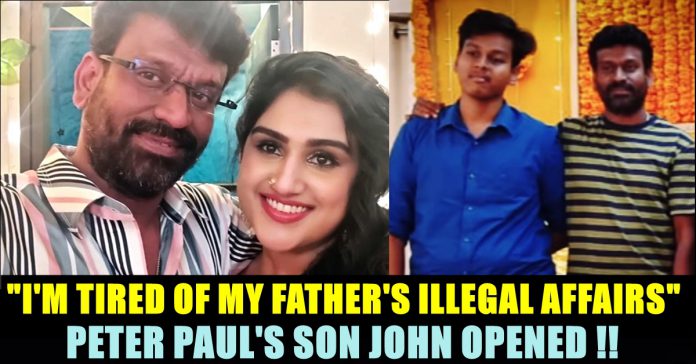 Peter Paul’s wife Elizabeth Helen registered complaint against her husband for marrying Vanitha Vijayakumar before proper divorce. While talking to media, Helen said that they are having a son and a daughter who are studying in college second year and in third standard respectively and added that wants her husband back. She accused Vanitha for marrying him in such a haste.

Now, in a recent interaction with Galatta youtube channel, Peter Paul’s eldest son appeared for an interview and refuted the allegations of Vanitha which she stated in her earlier interviews. While replying to Elizabeth Helen who said that her husband is an alcoholic and stayed in rehabilitation centre, Vanitha Vijayakumar said that Peter paul is a tee totallar. Vanitha said that Peter Paul restricted himself to a non alcoholic state even in their marriage when she consumed champagne.

Now, in an interview, Peter paul’s eldest son, John Edwards had said that his father is indeed an alcoholic and severely injured himself while trying to escape from an rehabilitation centre. He further added that his father had several affairs with women in the past. His mother reportedly stopped talking to him after he revealed that one of his girlfriend became pregnant with his child.

While talking about the dinner he had with Vanitha Vijayakumar and Peter Paul, John edwards said that he went there after he got invited by Vanitha Vijaykumar and his father who said that Vanitha’s younger daughter likes to spend time with him as a brother. But he neither approved nor informed about their marriage as Vanitha said.

“Talking about my father’s marriage with Vanitha Vijayakumar, I literally got used to it. I have been with my father since my childhood. Every time he joins a new company he would have an affair there. So I literally got bored and this marriage of him didn’t surprise me” John said in the interview.

Elizabeth Helen, during her interview, said that Peter Paul has always been involved in extra marital affairs. “He is also an alcohol consumer whose health got worse at one point due to his addiction.” she said who went on to add that he is also a womaniser. “As he is in media industry, he always goes after women. But this time, it went to an extreme level as he is demanding divorce from me.” said Helen who revealed that he had affairs with several women in his every workplace. “However, he is my husband. I need him in my life at any cost” she firmly said.