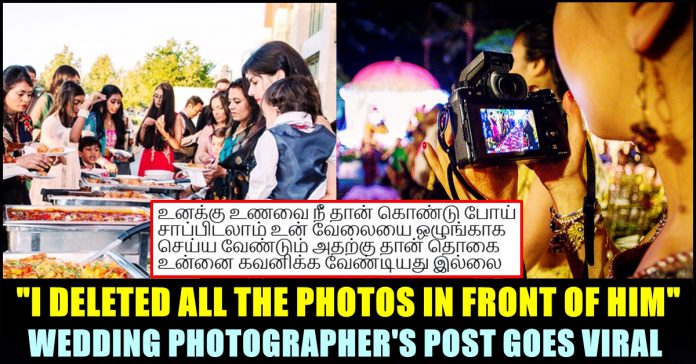 Reactions for the news reports on a photographer deleting 600 plus photos after being denied food at a wedding are flooding in Internet platforms. Marriage photos are considered precious as they are going to act as memories for the rest of our lifetime and we could never see a wedding taking place without a photographer, no matter how minimum the budget of the wedding is. Now, a man who was about to get married, requested his friend, a dog photographer to capture photographs for his wedding. After initial refusal, he made his friend accept for a less payment. However, things didn’t go as per plan as the photographer deleted all the marriage photos due to hunger.

The Photographer who is a Reddit user shared about his experience which is going viral in all forms of social media platforms. He who identifies himself as a “Dog Groomer”, says that clicking photos for a marriage event is not his “forte”. However, his friend convinced him saying that he didn’t care if the photos were perfect. The Photographer whose Reddit user name reads “Reserve6995”, agreed to shoot the event for $ 250 which he considers as nothing for a 10 hour event.

On the day of marriage, Reserve says that he followed the bride from appointment from appointment before the ceremony, taking her photos along the way. He also says that he shot the reception, speeches and people mingling. He started shooting around 11 am and was due to finish 7 : 30 PM. When they served food around 5 PM, he was supposed to be a photographer and they didn’t save him a spot as well.

“I’m getting tired and at this point kinda regretting doing this for next to nothing. It’s also unbelievably hot: the venue is in an old veteran’s legion and it’s like 110F and there’s no AC.” the photographer’s post read. When “Reserve” asked the groom for a 20 minutes break to get something to drink and eat, his friend said that needs to be either a photographer or leave the place without pay. “With the heat, being hungry, being generally annoyed at the circumstances, I asked if he was sure, and he said yes, so I deleted all the photos I took in front of him and took off saying I’m not his photographer anymore.” Reserve said through his post.

“If I was to be paid $250, honestly at that point I would have paid $250 just for a glass of cold water and somewhere to sit for 5min. Was I the a**hole? They went right on their honeymoon and they’ve all been off of social media, but a lot of people have been posting on their wall asking about photos with zero responses.” he ended his post.

The post went viral in social media platforms with 21 K upvotes and 2k plus comments. Many users commented supporting “Reserve” as he was denied his basic rights. However, posts confronting his activity also surfacing in Internet. Check out some of the reactions blow :

The professionals you hire to do anything for you in any setting are first people before they are craftsmen. Treat them as so.
If you are providing food for your guests, provide food for the cleaner and the soundsman and the photographer too https://t.co/IRNjUsce0e

a photographer in bungoma deletes 600wedding pics after he was denied food. Wah💔

There is always a thin line between hunger and anger😂

A photographer did this . Bcz she wasn't asked for food. And she was working continuesly for 6 hours.

Moral of the story ;

Be nice with your photographers or they may ruin your entire wedding memories only by one click 😛😜😝 pic.twitter.com/wt2rXiuVqQ