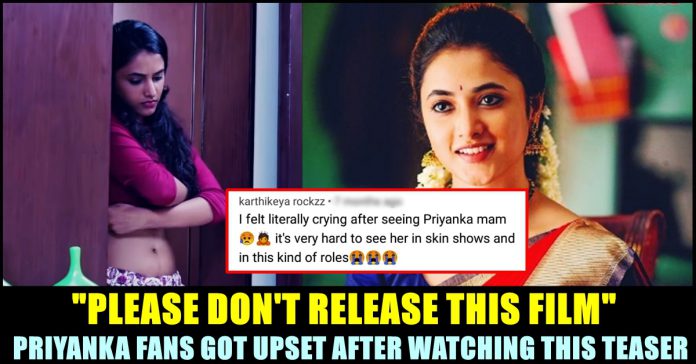 After seeing “Doctor” girl Priyanka Mohan featuring in the teaser of an unreleased film named “Tik Tok”, fans of actress has been expressing their dejection and requesting the actress not to “expose”. In the comment section of the 76 seconds long teaser which shows glimpses of the actress, many fan dropping comments asking the actress not to do such roles. Priyanka Mohan garnered a huge reception for her debut film “Doctor” in which she paired with actor Sivakarthikeyan. She got a huge cheering from fans in theatres for her opening scene in the Nelson Dilipkumar directorial.

Priyanka Mohan made her debut as actress through a Kannada film named “Ondh Kathe Hella” in the year 2019. She went on to act in Telugu films such as “Gang leader”, “Sreekaram” with Telugu actors Nani and Sharwanand respectively. Prior making her debut into Tamil film industry, she gained a huge fan base through her social media posts. Check out some of her recent posts below :

Now, as the actress is stepping towards a successful career by signing films with actor Suriya for “Etharkum Thuninthavan” and with Sivakarthikeyan for “Don”, teaser one of the actress’s earliest film grabbed the attention of the online users. The film which is titled as “Tik Tok” has “Moodar Koodam” fame Rajaji in the leading role.

The teaser video is trending in youtube with 5 lakh plus views. Watch the video below :

On seeing the video, many fans dropped comments expressing their dejection over it. A fan said that it hurts him to see Priyanka Mohan in the teaser whereas another wrote “I didn’t expect it from u..💔 it’s really hurting.. and plz don’t do that roles.. 🙏🙏🙏”. A twitter user wrote “Enna simran ithellam” in his tweet by sharing the video in the micro blogging social media site.

A recent report of Valaipechu has said that the actress approached the makers of “Tik Tok” and requested them not to release the movie. She wants them to remove her scenes from the film at the least as she has films with Sivakarthikeyan and Suriya lined up. However, we have to wait and see whether the films gets released or not.