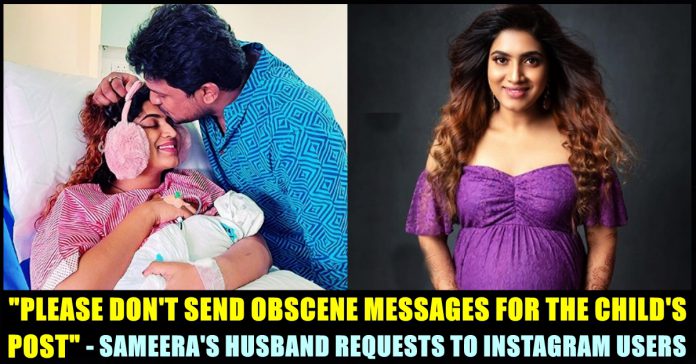 Sameera Sheriff who is known for appearing in the serials of Vijay Television has gave birth to a Baby boy and her husband Syed Anwar who is also a Television actor uploaded a post explaining about his emotions. He who thanked his followers, family members and Doctors, requested people not to send obscene messages for the particular post. Sameera, while being pregnant, had been replying to negative comments which surfaced in her social media posts criticizing her for doing what she loves.

Television actress Sameera Sherif announced about her pregnancy through her social media handles. She who got married to her “Pagal Nilavu” co-star Syed Anwar in the year 2019, announced that they are expecting a baby on 11th of April this year. She who is pretty much active in social media platforms, has been updating about her health status and also uploaded reel videos of herself moving legs for her favourite songs.

Sameera Sheriff and Syed Anwar acted as a love couple in a serial of Vijay Television named “Pagal Nilavu”. They also took part in the reality game show named “Mr and Mrs Chinnathirai”. Sameera enjoys nearly 6 lakh followers for her Instagram account and nearly 3 lakh subscribers for her youtube channel. She who has been making vlogs based on her daily routines, also performs reel videos based on Tamil songs.

Now, after she successfully gave birth to her child, Sameera’s husband Syed came up with a post in his Instagram handle, expressing his emotions. He said that Sameera gave birth to a baby boy on 4th of September and thanked his followers for the support they gave for the mother and child. He updated about the COVID 19 restrictions that are being followed it the hospital and cited it as a reason for not uploading a picture with his family.

“Sameera is the one who believed strongly in the whole process and gave me courage. My responsibilities towards this relationship grow even bigger. The entry of a new life into our family has also answered many questions which I always ask myself. In the most difficult time comes this blessing as a sign of courage and togetherness.” Syed wrote to appreciate his wife.

Further, Syed had a message to the people who didn’t like him and his wife. He wanted the Instagram users to keep the negativity away from the new born child. “It is my humble request to those who don’t like us. Please do keep your negativity away from the child’s post and be human enough to stay away rather than posting any kind of obscene messages. All of us have personal fights to fight in real life let’s not waste our time fighting with invisible fake people.” he said in his post.