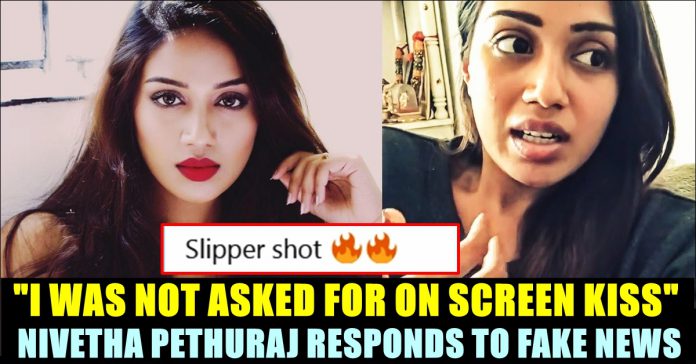 Actress Nivetha Pethuraj who predominantly works in Tamil film industry, is currently concentrating in playing lead roles in Telugu films. She who gained enough fame among the audience of Telugu film industry by acting in films such as Ala Vaikunthapurramuloo, Red, Chithralahari, Brochevarevarura etc, recently replied to a false report about herself refusing to act in kiss scenes with her co-stars. Replying to the media portal which reported the news, the actress requested them not to spread fake news about her.

Having more than 20 lakh followers in Instagram, Nivetha Pethuraj is enjoying a decent sum of followers in Twitter as well. A recent report that emerged in “Great Anthra” site said that the actress continues her “no-kiss” policy in her upcoming Telugu film with Vishwak sen.

The media portal reported that the actress is uploading glamorous pictures of herself in her Instagram account to hint that she is ready to do some bold roles. They also said that Nivetha drawn some boundaries in doing romantic scenes on screen. They said that the actress refused to do “Smooch” scenes in her upcoming film telugu “Paagal”.

They also reported that the “Sanga Tamizhan” actress maintained her “no-kiss” policy and added that it will be the first film of actor Vishwak sen that doesn’t contain a “lip-to-lip kiss scene”. On seeing this news doing rounds in social media platforms, the lead actress herself came up with a tweet to clear the air.

Nivetha said that she was not asked by the director of the film to perform “onscreen kiss” for the film “Paagal”. The actress made it sure that the film is beautiful without a kiss scene and asked the media portal not to spread such fake news. “Firstly I was not asked for on screen kiss for the film by the director. The script is so beautiful just the way it is. Please don’t spread false news. Thank you” read the tweet of the actress.

Firstly I was not asked for on screen kiss for the film by the director. The script is so beautiful just the way it is. Please don’t spread false news. Thank you https://t.co/kpODb6KR7z

However, the news wasn’t deleted or trashed, despite the actress’s tweet garnered nearly 3 k likes in two days. Many followers of the actress came up with reactions slamming the news portal for spreading baseless news against her.

Good. Slap on the face to a shitty gossip website.