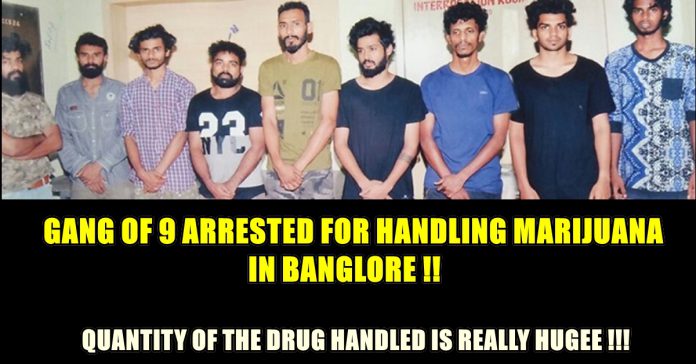 In the early hours of Friday, sleuths from the Narcotics Wing of the Central Crime Branch lay in wait for the 36-year-old kingpin of an inter-state marijuana racket – Nainesh alias Nandakumar – outside his home in Indiranagar.

At around 3 am, two cars – a Maruti Swift and an Innova – pulled up outside Nainesh’s residence. Upon confirmation that the man in the Swift was Nainesh, the CCB sleuths surrounded the two cars and began them. The search revealed a huge stash of marijuana, weighing 108 kg, worth over Rs 50 lakh.

The elusive Nainesh, who is a wanted criminal in Kerala too, was arrested along with eight of his gang members – Anas, Prajeel Das and Shafi from Kochi, Akshay Kumar from Mallapuram, Sajan from Thiruvananthapuram, and Shinaz, Nabeel and Mustaq from Thrissur. According to Bengaluru Police Commissioner T Suneel Kumar, Nainesh, who is originally from Thrissur in Kerala, had been procuring and selling drugs across different states.

“He would procure marijuana from Vishakapatanam and Odisha, and sell it to dealers in Tamil Nadu Kerala and Bengaluru. A complaint was registered against him in the Jeevanbhimanagar Police Station a few years ago. There are also several cases registered against him under the Narcotic Drugs and Psychotropic Substances Act in Kerala as well. He has managed to escape from the police several times,” Suneel Kumar said.

According to the Commissioner, the CCB received information that Nainesh and his associates were going to procure drugs from Odisha on April 4. “We also found out that he was going to bring back the ganja to his residence in Inidranagar’s Eshwarnagar area. We got the information that they were bringing back the ganja in two cars from Odisha. So, we surrounded his house and waited for them to arrive on Friday morning,” he added.

Upon their arrest, Nainesh is said to have confess to the police that he used to sell the marijuana in small quantities to college students in Ejipura, Marathahalli, Banaswadi, Hennur, KR Puram and Ramamurthynagar, apart from his operations in Kerala and Tamil Nadu.

“Nainesh and his associates would make packets containing 8 to 10 g of ganja and sell it to college students,” the Police Commissioner said.

The police have also seized over 1 kg of marijuana found inside Nainesh’s house, nine mobile phones, and two cars. The accused have been booked for procuring and selling large commercial quantity of drugs under the NDPS Act.