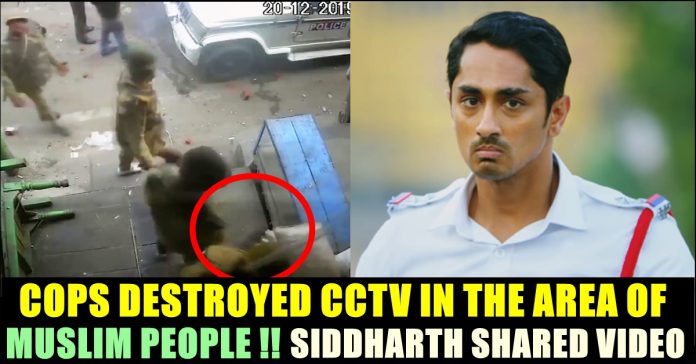 A video of police officers destroying CCTV cameras in the Muslim occupied area on the day when 5 Muslims were shot during the protest has been surfaced. The video shows cops smashing the cameras with objects in their hand. Watch the video here :

All of the families of the five dead men say they were shot and killed by police as a protest flared against the new law. Reuters could not independently verify those accounts, and none of the more than 20 individuals Reuters interviewed saw police open fire.

Police say they used baton charges and teargas, and opened fire to control the crowd but did not kill anyone. Police add that the men must have been killed by violent armed protesters whose shots went astray. An investigation into the violence is underway.

Residents of the area say police broke several CCTV cameras in the area before the violence began. Reuters was unable to independently verify those accounts, but did review CCTV footage from two cameras on shops in the area. In both cases, the footage ends abruptly after a policeman waving a baton is seen trying to hit the cameras.

Actor Siddharth who has been constantly raising voice against the activities of this ruling government has wrote “When the Police starts to tell Po-lies. #Shame”

So far, It has been reported that many people died in the protest conducted to oppose CAB act and thousands of people were arrested. In Tamilnadu, except ADMK, almost every leading parties are opposing the event. While youngsters across the country are protesting against the law passed by the ruling government, Celebrities also joined them in protesting against the Citizenship Amendment Law. Kamal Haasan, Siddharth, Taapsee Pannu, Shraddha Kapoor, Anurag Kashyap, Aditi Rao Hydari, Harbhajan Singh, Irfan Pathan, Ayushman Khuranna, Akshay Kumar are few of the celebrities who are acting against the law passed in parliament.

The bill passed by the government was being criticized by the public. The Bill seeks to amend the definition of illegal immigrant for Hindu, Sikh, Parsi, Buddhist and Christian immigrants from Pakistan, Afghanistan and Bangladesh, who have lived in India without documentation. They will be granted fast-track Indian citizenship in six years. So far, 12 years of residence has been the standard. Many are criticizing the law for being biased and discriminating muslims. It is also criticized for violating the secular principles of the constitution.