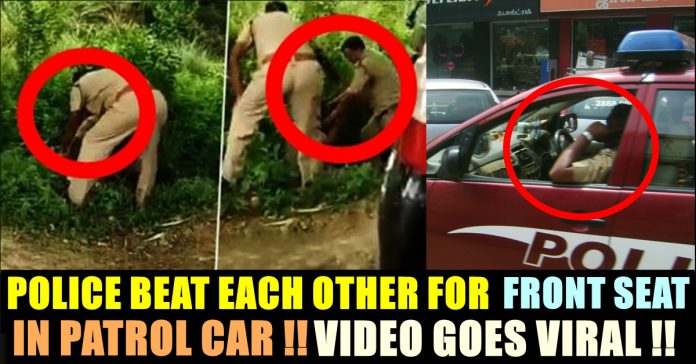 Uttar Pradesh is a place which we see in headlines most of the times for the crimes that are taking place in the state. Now to our shock, not due to the criminals but because of the police officers, the state got the attention of citizens.

In this recent viral video, Three of the policemen from Kanpur, Uttar Pradesh were caught fighting in the video for the front seat in the patrol vehicle. The video, which was shot by a passerby on 18 August shows, the Police Response Vehicle (PRV), which is a marked police vehicle parked on the roadside. Two policemen in uniform can be seen fist fighting aggressively in the bushes on the side. A third policeman also joins in the fight towards the end of the video and starts beating the other constable. The video was taken by a passenger of a car, which was crossing the incident. The constables engaged in the fight have been identified as Rajesh Singh and Sunil Kumar. The identity of the third person is not out yet. The marked police Toyota Innova with the number PRV 428-UP 100 can be seen parked on the roadside, for which the policemen were fighting.

As per latest reports, the department has suspended both the policemen for inappropriate behaviour while on duty. An official revealed, “Both the constables tried to take the front seat of PRV. Later, an argument ensued between them, and they physically attacked each other in public.” SSP Anant Deo added, “Following the incident, which took place on Friday and came to light on Sunday morning, the two cops have been suspended and the investigation is underway.”

This is not the first time that the Uttar Pradesh Policemen got into fights publicly. Earlier, a video showed that UP policemen fighting in full public view over a bribe. The policemen were then suspended from the duty. It is not known what course of action will be taken on the officers if they are found guilty.

We wish the officers of Police department would start fighting the criminals in future rather than beating their own colleagues in fights over petty things.