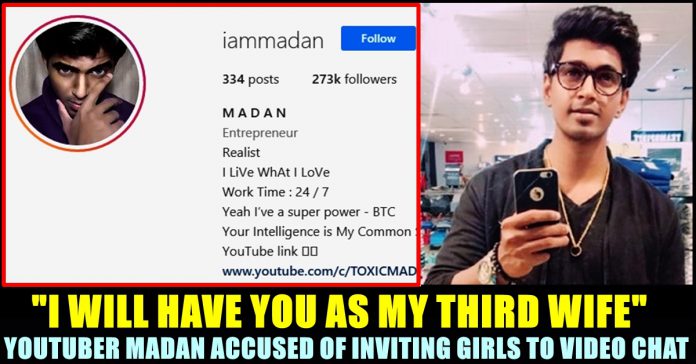 After complaints emerged against a gamer named Madan, State’s Child Welfare Rights Commission has initiated investigations, says the latest report of News 18. A complaint has been made in Chief minister special section, the report added. While Madan who runs the youtube channel has denied the allegations that emerged against him, Police department has intensified the investigation, report further said.

A youtube channel named “Madan” which streams games such as “Free Fire” with 7 lakh plus subscribers, accused of abusing girls and cheating money from small kids and students, according to a report of News 18 Tamil nadu. The complaint was made to the police officers of Chennai cyber crime. Through the audio released by News 18 report, it could be understood that a person named Madan who runs the youtube channel degrades girls by abusing them while streaming games in his youtube channel.

Now, it has been reported that the channel is involved doing obscene conversation with girls more than streaming games. After seeing the reception of abusive videos, a separate channel named “MADAN 18 +” was launched. The one who runs the youtube channel, initially hid his identity like the Tamil film characters and boasted about himself through his videos, according to News 18. He degraded girls and abused them in the pretext of being real.

According News 18, Madan invited girls who comes to play, watch his game streaming to his Instagram account and asked them to chat with him through video call without wearing clothes during the wee hours. In few videos, he advised his followers about how one should get ready physically before first night like a Doctor. It has been reported that he asked inappropriate question to girls and talked to them about their private parts.

The report, further says that Madan is involved in having obscene conversations with girls and has been caught inviting a girl to be his “third” wife. Many kids got influenced by Madan and started youtube channel of their own. the report said. Madan defended himself saying that it is usual to talk few bad words while playing online games in a cool manner.

Madan said that he worked hard and did live stream for 20 hours to gain subscribers and accused people who hate him of spreading fake news about him. Many kids emerged supporting Madan and said that he mentioned 18+ in his videos. They asked public not to let their kids watch the videos of Madan. However, Police officers, had reportedly said that serious investigations will be initiated against him, said News 18. Along with Police officials, State’s Child Welfare Rights Commission have also initiated the investigation, the repot added.