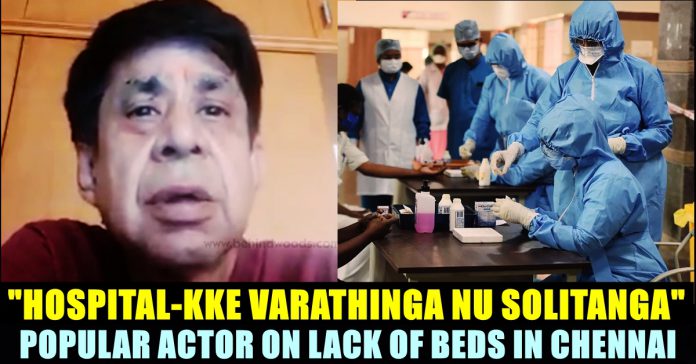 Multi talented personality T.V Varadarajan who is known for acting in several Television serials and for his news anchoring stint in Doordarshan channel, came up with an important message to the residents of Tamilnadu, especially Chennai regarding the threat being created by Coronavirus.

Doctors across the world are having their hardest times due to the spread of deadly virus COVID 19 which killed more than 4 lakh people around the globe. In Tamilnadu, the number of cases are increasing in daily basis, in a large number. So far, 31,667 positive cases has been reported in the Tamil speaking state and 269 people have died to die to the virus which killed four lakh six thousand five hundred and forty nine people across the world.

India is now sixth worst-hit country in the terms of cases and has the 12th highest death counts. The count increased from 1,50,000 to 2,00,000 in just 8 days. People of the country are highly believing that the virus has the potential to kill only elderly people who crossed 50 age limit. Now, many the death reports of youngsters aged between 15 to 35 has created furore in the state.

Now, Varadarajan, in his video conveyed a message on how hard it is to find a hospital bed for a patient who go infected by the virus. He tried to make people understand about the struggle by sharing his personal experience. Varadarajan and his younger brother found it very difficult to find a hospital to admit one of their closest family friend who showed symptoms of Coronavirus.

“I wanted to shared about this incident which happened today morning to me and my brother. By sharing this, I wanted to warn you all about this Coronavirus. One of my family’s closest friend, you people know him as well. I don’t want to reveal his identity. He had fever for past two days and today morning he had a severe breathing problem and it looked like a Corona attack” says Varadarajan in his video.

“When we tried to admit him, no hospital had a single bed. All big hospitals in Chennai. Even in Government hospitals, there was no single bed for our friend. Hospital authorities are asking us not to go the hospitals as they can do nothing to help us. They said that they couldn’t able to treat him. We even approached Government security by using our influence. We talked with hospital MD, owner and chairman. Nobody could help us. They are very frank as there is actually no bed to admit him. He is a very disciplined person, we don’t know how he got infected” he said who went on to warn people who are roaming outside without reason.

“Don’t roam outside with over confidence by thinking that you won’t catch the virus. Don’t go outside without necessity. You have to follow the safety measurements while going out. Seeing the struggle faced by the family today, I felt like crying. I don’t know where we are going to get admitted if we have to face such situation” Varadarajan said. “We don’t cause trouble to our own family” he added.