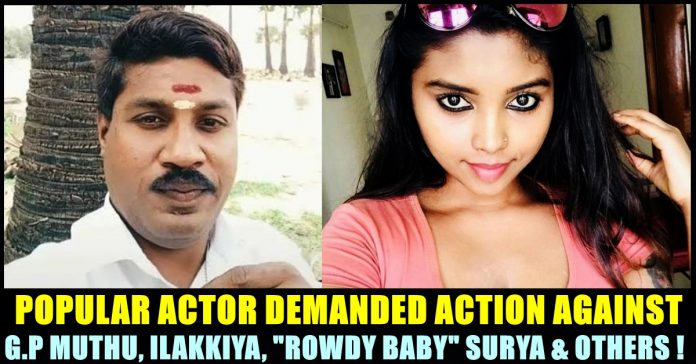 Popular Tamil actor Sugumar who is known for appearing in a Tamil film named “Kaadhal”, “Virumaandi” and many other films demanded action against Youtubers such as G.P Muthu, “Rowdy Baby” Surya, Ilakkiya and others for promoting obscenity among kids through their you tube videos. The news emerged on Monday, weeks after a legal complaint was made against the same set of people for similar reason. Along with Sugumar, few other notable celebrities of Tamil film industry raised the complaint.

G.P Muthu lives in a village named Udangudi which is located in Thoothukudi district. Repairing old windows, doors which were made of wood is his occupation. He is also running a lumber shop in his village, says reports. He who has four children, started uploading videos in Tik Tok during his work time to engage himself. With Tik Tok being a widely used mobile application of that time, videos of G.P Muthu went viral among the users of it.

He imitated Tamil film songs and his videos started receiving views in millions. G.P Muthu who started doing videos for entertainment, started spending his full time in Tik Tok. He became a subject to severe online trolls and didn’t stop doing videos in Tik Tok. After the TIK Tok app got banned, GP Muthu initiated a youtube channel and doing videos in it.

Currently, the youtube channel of GP Muthu enjoys 8 lakh plus subscribers with half million views for every video. It is very well known that GP Muthu often uses abusive language to express his frustration over the people who are trolling him. Ilakkiya and Rowdy Baby Suriya rose to fame after performing Tik Tok videos.

Meanwhile, a recent report had said that actors united together and raised voice against the youtubers. “Kaadhal” Sugumar, Actor Arul Mani, Actress Nirbhaya Revathi and few others conducted a press meet while complaining against the youtubers. “For our cinema industry, a censor board is being operated to remove obscene sequences. But for social media platforms such as Youtube, Whatsapp, Twitter and Instagram, there is no one to censor” Sugumar says in the press meet.

“A 10 year old kid who watches them could think that talking obscene language will take them to places. Certain channels are inviting them and providing them awards as well. When my child asks me why he receiving an award, could I say that he gained fame by talking bad language ?” Sugumar could be seen saying in the press meet. The actors who raised the complaint expressed their concern over children who learn through online classes getting misguided on seeing the growth of personalities such as G.P Muthu.

When the actors were asked whether they are making the complaint just because the youtubers started getting movie opportunities, they reportedly said that the future of kids is their only concern. “When I watched the videos of G.P Muthu, Ilakkiya, Rowdy Baby and others, I could tolerate them myself” Sugumar added.