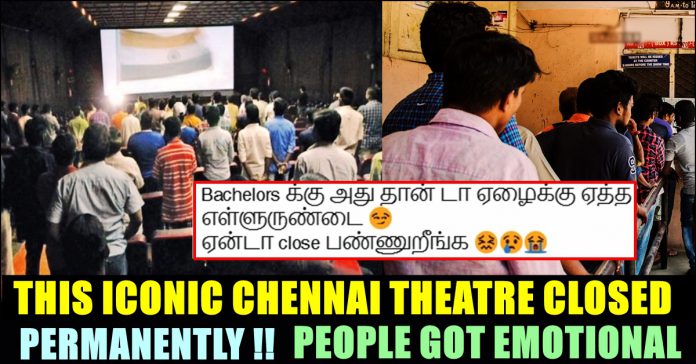 Instead of celebrating its 50th year anniversary, AVM Rajeswari theatre in Chennai, has announced that it is going to get closed permanently. It has been reported that lack of audience made the theatre authorities to make this decision. The theatre was functioning since 1970 and is located in Vadapalani, one of a busiest area in Chennai city.

Mr. K Shanmugam of the iconic single screen has confirmed the news to media. Popular movie production house AVM studios inaugurated the theatre in the year 1970 for the people who are financially poor. Till last few days, the theatre functioned with lowest ticket price compared to other theatres.However, theatre faced lowest footfalls for past few days it seems. It saw only 20-30 members in daily basis, according to reports. When movies of top heroes gets released, the theatre will be packed but the very next day there will be no footfalls, says reports. The theatre authorities are planning to close it even before the corona crisis, the report added.

Despite of no official announcement, the news was out in several media portals and people already started missing the theatre which provided snacks in lowest price, comparing to all the theatres in the city.

#AVMRajeshwari Theater, Vadapalani will be permanently closed. One of the very few theatres in Chennai to have the lowest ticketing price.

People who using twitter from Chennai, started expressing their emotions attached to the single screen. “Whenever I was low on budget, AVM was there and helped me. I’m sure it was the same for many people. I’d watch a film and have some snack with 100 Rs” wrote one of a user whereas another one wrote “Still remember going to #AVMRajeshwari during college days and spend just 40 Rs for a movie ticket and come out happily!!”

One of the most affordable single screen in #Chennai 👈

Sad to hear of this news. One of the iconic Cinema halls in the city #avmrajeshwari, which even in this times.Never increased their ticket prices.Because many people who were associated with the industry watched movies there. https://t.co/vARwt4ppf0

One of the very few theatres in Chennai that had ticket rates under 100 even after GST.

Whenever I was low on budget, AVM was there and helped me. I'm sure it was the same for many people. I'd watch a film and have some snack with 100 Rs

I was regularly watching in this theatre when i was working in vadapalani.

Have you watched any film in this iconic theatre ?/ Comment your experience !!