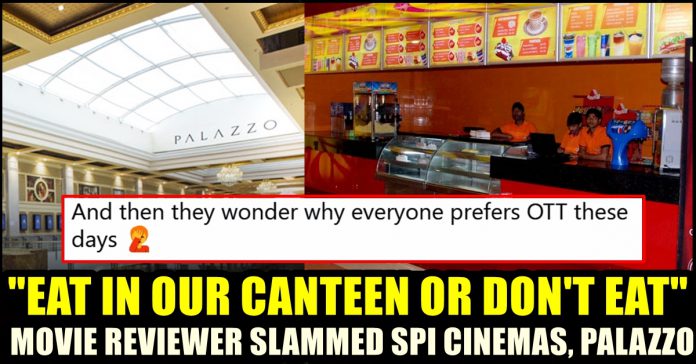 Popular movie reviewer Karthik kumar who is known for his selfie movie reviews, came up with a series of tweets complaining against SPI cinemas, securities of which didn’t allow him to go outside during interval to eat what he wants. Instead, he was forced to eat food that are provided in the theatre canteen. Frustrated reviewer complained about the same through his tweets and let his followers know about it. Karthick Krishna runs a youtube channel named Selfie review and enjoys nearly 2 lakh subscribers.

Karthick who went to SPI cinemas that is located in Palazzo mall, Vada palani to watch Venom movie, tried to go the food court during interval as he didn’t like the food provided in the theatre canteen. The reviewer said that he felt hungry at the time and the fast food items if theatre canteen didn’t impress him at the time.

When he tried to go to the mall’s food court which is next door, he was stopped and asked by a theatre employee not to leave the premise and return. Karthick was forced to return to his seat and the employees didn’t care about his opinion on the food provided by the theatre.

The reviewer, through his series of tweets, questioned the idea behind theatres being constructed inside a mall. He also questioned why theatres are not allowing people outside as there is no chance for security issue to take place. “we have our IDs and Tickets with us so u cant call it a security issue. yes u might not allow outside food citing sanitation issues. but why force us to eat only wat you sell? Maharashtra has ordered that multiplexes shouldnt stop customers from bringing their own food” Karthick said in his tweet.

“There is no such rule here yet, still respecting a individual’s taste is basic courtesy. we pay for our tickets, theatres charge extra for the online booking, every item in their canteen is overpriced, yet, you cant allow ppl to eat wat they wish.. totally unethical” Karthick further wrote and tagged Ministry of Broadcast, SPI cinemascinemas and consumer affairs by asking whether he misses anything.

bt i was told that i shouldnt leave the premise + cant go to the food court and return. i replied them that ther are no such rules bt the theatre employee insisted that if i am hungry i shld get something from their canteen and if i dont like any of it, its not their problem 2/5

we have our IDs and Tickets with us so u cant call it a security issue. yes u might not allow outside food citing sanitation issues. but why force us to eat only wat you sell? Maharashtra has ordered that multiplexes shouldnt stop customers from bringing their own food. 4/5

Assume that everyone in the cinema hall asks this option to go out for a mini food trip during the interval like you, so when everyone comes back, do you think cross checking the tickets for the all the viewers again is practically possible?

Yeah Exactly Happened to me Also I was hungry and literally had less money so i was going for the Food Court.But The staff stopped me and asked me the exact questions you were asked Totally Unethical .

According Article 19 in The Constitution Of India 1949, you got freedom to roam around anywhere. #JaiBhim lawyer venumuna irukuraru.

And then they wonder why everyone prefers OTT these days 🤦

Happens at all theatres inside the mall..could be hygiene issues as well. But all said and done recently went to @SPICinemas #Sathyam main screen. Pathetic food options !!! @_PVRCinemas take over and horrible food . Have to puke at 4 am after I came back. It was popcorn 😅

This is happening in most theatres in Chennai and Bangalore. They never allow us to leave the premises citing they have the right of admission.

@SPICinemas we stopped coming to your theatres so exact same reason. No matter how good your theatre is, you are ruining our experience. Not sure you realise how many tickets you are losing because of this. OTT has more affordability in price n freedom