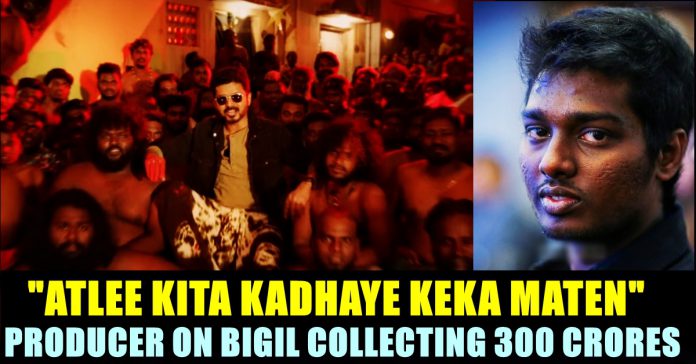 Atlee is arguably one of the most loved and hated filmmaker of Tamil cinema right now. Being a former assistant of Shankar, Atlee’s way of presenting his films and the castings he choose for the characters are considered as his major qualities. All the four films of Atlee became blockbusters despite of the plagiarism controversies. His recent release “BIGIL” has reportedly collected 300 crores in the box office. The film marks the third collaboration of the duo, after “Theri” and “Mersal”.

The film which has actor Vijay in three different dimensions such as a Football player, a local gangster and as a coach for a state football team, was made in a budget of 180 crores. Unlike other Vijay movies, “BIGIL” is facing controversies since the first day of shoot. Assistant director KP Selvah claimed that the story of BIGIL belongs to him and registered case against the makers. Followed by that, when the trailer released, many compared it with Shah Rukh Khan’s Chak De India.

Being one of the most paid filmmakers of Kollywood, Atlee is now all set to debut as director in Bollywood according to sources. Now producer K Rajan who is known for producing various films in Tamil and Telugu film industry has made a comment on Bigil’s collection and the way it was made.

When the host of the interview asked him how much money he would spend on a movie directed by Atlee, the producer said that he won’t listen to the story of Atlee at all. “I would rather chose a low profile filmmaker to make a quality movie. Even if it gives me loss. I would accept it” said Rajan in the interview.

Watch the interview of him below :

While talking about the nuances of being a film producer in Tamil film industry, Rajan shared many of personal experiences in this interview. While talking about Bigil collecting 300 crores in box office, Rajan said that Bigil has made no profit at all. “I have inquired a distributed who did distribution for Bigil in two areas. As Bigil had no competition for 2 long weeks, it received a decent footfall in theatres. But the distributor whom I inquired couldn’t pay the interest for the loan he bought. He could only managed to get the original amount with which he bought the film.” said Rajan in the interview.

Further he added that there is no film deserved to loss if it has Vijay or Ajith as lead. “If the director plans well for the shooting of a film, there is no need for a film to face loss. Instead of removing most of the scenes in editing table which were shot, a filmmaker should plan and shoot in a proper way. It is the only way for a film to get success” he added.

What do you think on this interview of Producer Rajan ?? Comment your views below !!