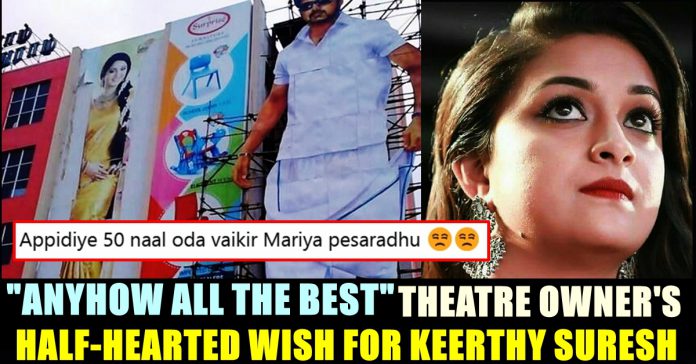 Teaser of Karthick Subbaraj’s next production venture “Penguin” directed by Eshwar Karthick released lately with highest expectations. The film which has actress Keerthy Suresh in the lead role, is going to depict the struggles faced by a Mother who is searching for her missing son.

The film which is touted to be a horror thriller, is going to be the second mainstream Tamil film to get a direct online release after Ponmagal Vanthaal. Music composed by Santhosh Narayanan, the film was produced by Stone Bench productions and Passion studios.

The teaser suggests an emotional mother’s struggle to rescue her son from a serial killer who is called as “Umbrella man” Reports suggests that Keerthy accepted to do the role after after hearing two lines of the story as she reportedly got moved by the core plot. The film is going to get streamed from 19th of this month.

As we all know, there is a cold war had took place between theatre owners and online streaming platforms, since the first ever announcement of “Ponmagal Vanthaal”. Distributors association severely condemned actor Suriya not to release the movie in theatres. They warned him of banning his movies in theatres of Tamilnadu. However, the film got streamed and received mixed reviews.

Now, on seeing the visuals of “Penguin”, owner of popular theatre Ram Muthuram Cinemas in Thirunelveli, posted a tweet regretting the film missing a theatrical release. “PenguinTeaser has awesome visuals + Santhosh Narayanan’s music, will be perfect for theatrical release. Big Visuals + Dolby sound will take this to a new level. Anyhow all the best” read the tweet.

#PenguinTeaser has awesome visuals + @Music_Santhosh's music, will be perfect for theatrical release. Big Visuals + Dolby sound will take this to a new level.
Anyhow all the best

To a follower who asked whether they would run the film for 50 days, the theatre owner replied by saying that they will definitely do it if the content is good.

Me 2 feels the same😢..It will be in the lines of game over, kaithi in terms of theatrical experience.. But missed#Master

Not only the owner of Muthuram cinemas, this is the mindset of every theatre owner in Tamilnadu. Using this lockdown opportunity, online streaming platforms are looking for all possible ways to conquer the Tamil film industry. Reports suggested that they even tried to buy “Master” and “Soorarai Pottru” but failed as the makers of them felt that theatrical release will be apt for their products. Comment your views on “Penguin” getting an online release and this tweet of the theatre owner !!