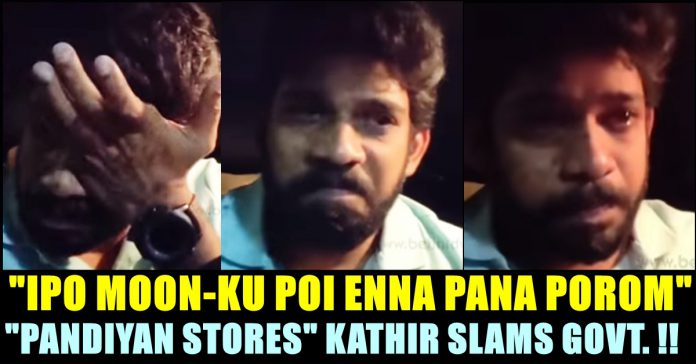 Popular Tv actor Kumaran who is known for his appearance in Vijay Tv’s “Pandiyan Stores” serial has posted an emotional video regarding the demise of the 2 year old child, Sujith Wilson.

In the video we can see, Kumaran shedding tears on thinking of the loss of the 2 year old child. He asked many questions to the government and to the people of Tamilnadu in his video. “What are we going to do by reaching the moon ??” he asked in his video. “What is the urgent need to reach the moon now ?? If we couldn’t save a child which fell down in a borewell, what our technology is aiming ?? Instead of developing technologies for the instant needs of human beings, why are we concentrating in discovering rockets ??”Kumaran asked in his video.

“Once Abdul Kalam said that the best discovery of his own is the one he did for a handicapped child. He didn’t say one of his rocket as his best discovery. He even stated that every other discovery of him was made in order to destruct something else. That is his favourite only because of it being a constructive one” Kumaran said in his video.

WATCH HIS VIDEO BELOW :

“Second question I wanted to ask is to us. To we people. During the entire process of Sujith’s Rescue, I saw various comments of the public. But no one realized that it was a mistake committed by us. When are we going to realize that it was our mistake ??” Kumaran said who even said that there are many Sjiths are dying without media attention. Kumaran further asked why no one questioned the family for not closing the abandoned borewell.

Two year old kid Sujith’s demise left the entire country in deep grief. The more than 80-hour long battle to save two-year-old Sujith Wilson, who had fallen into an abandoned borewell at Nadukattupatti, near Manapparai, in Tamil Nadu on Friday, failed on Tuesday with rescue workers managing to retrieve only his “highly decomposed and dismembered” body.