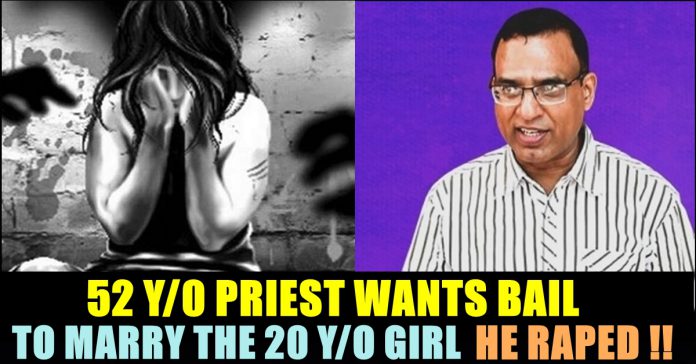 A former priest who got convicted for raping a minor seeked bail from the court to marry the victim. He asked for interim bail for two months to marry the victim who is 20 years old now. Robin Vadakkumcheril, a 52 year old, is a former vicar at St. Sebastian church, Kottiyoor. He who was convicted of raping and impregnating a minor girl, has approached the Kerala High court for the bail.

Robin has said that there was no impediment to the marriage as the Pope had dispensed him from all priestly obligations including celibacy. He had claimed that their child Dominic Savio is now three years old and in the custody of St. Angelo’s Foundling home, kannur under the supervision of the Child welfare Committee. However, the prosecution has categorically denied his plea and said that it could be a ploy to get relaxation for the 20 year prison term. Public prosecutor Suman Chakravarti has said that every rape accused would offer to marry the victim in future if this suggestion from Robin is accepted.

The Protection of Children from Sexual Offences in Thalassery imprisoned him for 20 years and imposed a fine of Rs. 3 lakh. In May 2016, when the victim was 17 years old, Robin induced her to go to his bedroom. When she obliged his comment due to the respect she had on him as a priest, he committed rape and sexual assault against her. This resulted in the minor becoming a pregnant and giving birth to a baby boy on 2nd february 2017.

Robin, in his petition, stated that the family members of him and the victim have repeatedly approached the Child Welfare committee seeking custody of the child but it was denied as they are not married. The Committee also stated that the permission could not be given as the father of the child is a prisoner. They said that the custody application cannot be considered on merits. “Upbringing in a orphanage away from parental care would certainly traumatize the child”, Robin stated in the petition. He also stated that he still loves and expressed his desire on leading a family life with her and with the child. He said that the girl was ready for the marriage. However, a police officer who part of filing the status report in court said that the survivor is studying again and had a good chance of rebuilding her life.

“It is true that the priesthood is an impediment to the marriage. However, the holy father had dispensed me from all priestly obligations including celibacy, on a request place before the pope. In order to ensure the welfare of the child and also to protect my future, the permission of court is needed to get married, during the pendency of the appeal. Solemnization of our marriage, at the earliest, would help us obtain joint custody of the child from the orphanage home”, he stated in his petition which is going to be considered by the court on July 24. It is notable that Robin’s influence on the family of victim was so powerful that the victim’s father had taken the blame for raping his own daughter during the initial days of investigation. It was later revealed that he had taken the blame due to the immense pressure and the crime committed by Robin proved beyond doubt after DNA tests.

This outrageous offer from the accused created huge outrage in social media where people started raising voice against Robin claiming that marrying the victim would not bring justice to the crime.

This is unacceptable and is nothing but a mere cry for sentiments. No person should be subjected to anything as evil rape and rape trauma let alone be married to the abuser himself.
He's nothing but a PEDOPHILE.
P E D O P H I L E.