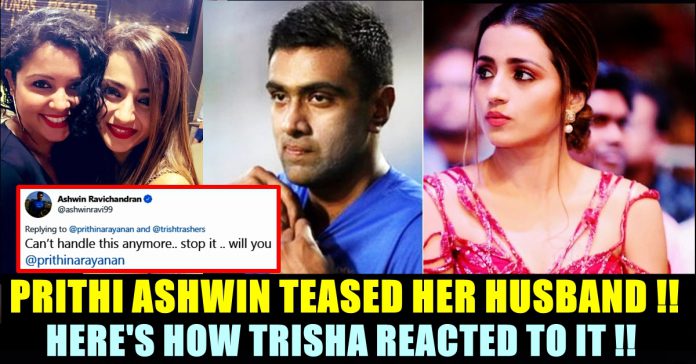 Ashwin Ravichandran who is very much busy in India-west Indies series is also pretty much active on social media. The Tamilnadu based off spinner is an ardent fan of actress Trisha which is known for many of his followers and fans. Years before when he took part in a Tamil television show, said he had started a fans club for Trisha when he was in the 8th standard. He had fallen in love with her after watching the actress in the Tamil film “Lesa Lesa”, directed by Priyadarshan.

Now his wife Prithi Narayanan seemed to have met the “Gilli” actress in an event where she took an adorable picture with her. She also decided to tease Ravi Ashwin by posting it in her twitter account by tagging him.

In the post she added a caption saying “With the absolutely sweteestest
@trishtrashers. Here, take it @ashwinravi99 ❤️”

Ravi Ashwin who got the courage to reply to the post, said “Can’t handle this anymore.. stop it .. will you @prithinarayanan”

Can’t handle this anymore.. stop it .. will you @prithinarayanan

Ashwin with a bunch of his close friends, started the fan club and used to collect her photographs. But Ashwin humorously revealed they did not know associations should be registered with local authorities to get recognition.

On the same show, Ashwin opened up on his interest in and love for Tamil films. He claimed he likes comedy films and takes out time to watch new Kollywood movies. The cricketer is a big fan of superstar Rajinikanth.

Ravichandran Ashwin, on the profession front, failed to find a place in the first of two-Test match against the West Indies, with all-rounder Ravindra Jadeja picked in the team ahead of him. If India’s premier spinner Ravichandran Ashwin, who has been lately been out of Test action, gets a chance to feature in the second match against the West Indies, he will have a chance to equal or cross spin legend Muttiah Muralitharan’s record of being the fastest to 350 Test wickets in 66 Tests. Ravichandran Ashwin has picked up 342 wickets from 65 matches so far.

Though Ashwin has been out of Test action for India, he has been plying his trade in the County Championship for Nottinghamshire. His last stint with the county club was a successful one as he picked 20 wickets from two matches.