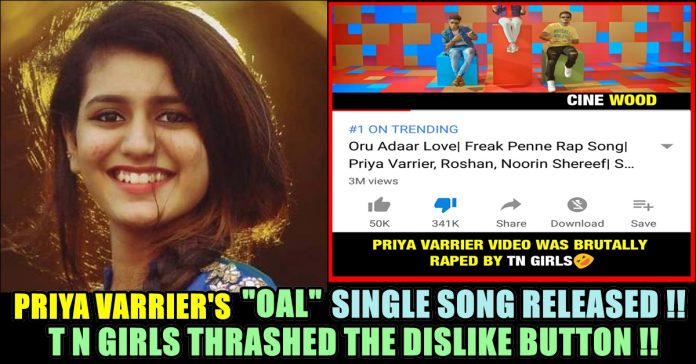 Though the first song was a massive hit, the second number is being massively trolled in the comments on the YouTube page. While some users commented on the gibberish lyrics, there were others who trolled Priya Prakash Varrier and even compared her to Dhinchak Pooja. What is striking is the number of dislikes the song has garnered within a day—241,000 dislikes as opposed to 31,000 likes. Maanikya Malaraya Poovi went viral in February for a scene which featured the actress Priya Prakash Varrier flirtatiously winking at a boy, and playing around with her eyebrows. She garnered one million followers on Instagram in just a single day, reportedly becoming the fastest Indian celebrity to do so. As per the latest Google trends reports, Priya Prakash Varrier outstripped even Bollywood stars like actor Deepika Padukone, and Sunny Leone in number of searches.

A complaint was filed by a group from Hyderabad against Priya Prakash Varrier and makers of the song Manikya Malaraya Poovi. The group alleged that the song hurts sentiments of Muslims. The Supreme Court, in August, quashed the FIR filed against Priya and the team. The case was heard by Chief Justice Dipak Misra and Justices A.M. Khanwilkar and D.Y. Chandrachud. According to reports, Dipak Misra said to the state counsel: “Somebody in a film sings a song and you have no other job but to file a case.”

Check out the trolls here :

#PriyaVarrier #OruAdaarLove dislike button is going crazy 😂😂All credits to TN boys. Don’t mess with us again. Kerala social media is not even 10% of TNs media power

Negative impact of priya varrier in keralite .she is behave her self as a lady super star 😂😂 and over hyped .and the Kerala peoples doesn’t like her and she is wearing full of makeups 😂😂 and acting illayea expressions like cowdung💩

Priya Varrier attitude is worst than SivaKarthikeyan?? Why so much of hatred??? 😳😳😳 #OruAdaarLove

The bizarre, unjustified hate for #FreakPenne featuring national crush #PriyaVarrier is going through roof. Reports suggest it’s the most disliked YouTube video in 2018!
Social compliance is hugely frustrating, & for those who endorse it, I wish you a speedy recovery. pic.twitter.com/Dy9HxmGuqU

What do you think on these trolls ?? Comment below !!