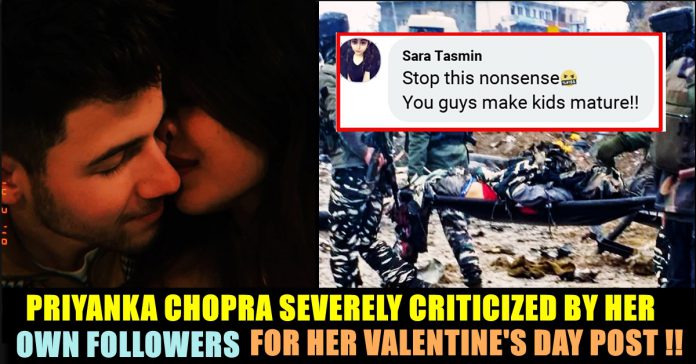 Busy stars Priyanka Chopra and Nick Jonas couldn’t have missed celebrating Valentine’s Day together, be in Los Angeles or London. Yes, that’s exactly where the couple are for their first Valentine’s Day celebrations post wedding. Both Priyanka and Nick sent out love and warmth to their fans and followers on Instagram, and as bonus, shared two very mushy photos, which we are crushing on right now. Priyanka posted a photo of her cosying up to Nick and kissing him while the photo posted by Nick can only be termed as a classic.

But people thought that it is not a right time to celebrate Valentine’s day as India lost it’s 44 sons in the Pulwama attack. Hatred filled comment section surfaced though the actress expressed her condolence through twitter yesterday.

Absolutely shocked by the attack in #Pulwama…Hate is NEVER the answer!!! Strength to the families of the martyred jawans and the CRPF soldiers injured in the attack.

Some people even pointed out the contradiction of the actress in Twitter and facebook. Many trolled the actress for celebrating valentine’s day  a day later. Check out some of their comments here : Priyanka Chopra shared this picture on Instagram as well with the caption “Happy Valentine’s Day to you and your loved ones.. always and forever”

Happy Valentine’s Day to you and your loved ones.. always and forever

India was shrouded in unbearable pain as we lost many of our brave hearts yesterday. An SUV which was carrying more than 350kgs of explosives rammed into a CRPF convoy taking lives of more than forty of our jawans and left many critically injured.

Later, Pakistan based group Jaish-e-Mohammed (JeM) took full responsibility of this attack which left our entire nation angry, heartbroken and under immense grief.

Prime Minister Narendra Modi today warned that those responsible for the Pulwama terror attack in which 40 CRPF soldiers were killed would pay a “very heavy price” and had made a “big mistake”. In hard-hitting comments at an official event, PM Modi said security forces had been given a free hand to act against terror.

“I want to tell the terrorists and their backers… they have made a big mistake. You will have to pay a very heavy price… I assure everyone that the forces behind the attack… we will bring them to justice,” PM Modi said in Delhi after chairing a top level security meeting with senior ministers. He made the remarks before flagging off the Vande Bharat Express, India’s fastest. 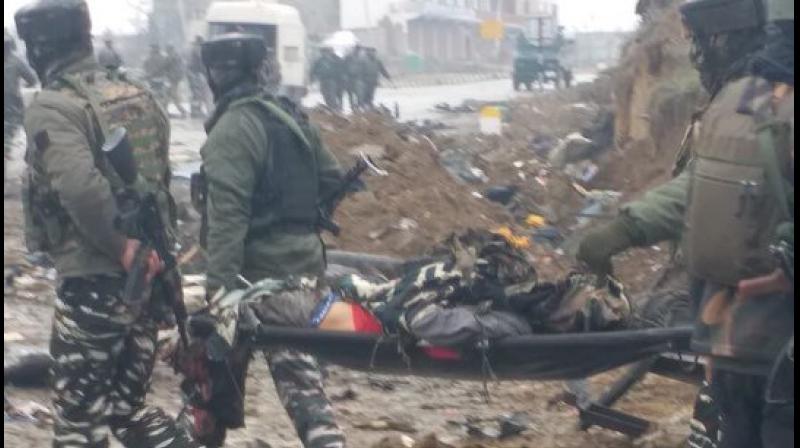 “There is a lot of anger, people’s blood is boiling at what happened… I understand,” the prime minister said in his remarks on the terror attack. The neighbouring country, if it thinks it can destabilize India, it can forget it. That will never happen,” he said, adding, “We will give a fitting response to this attack.”