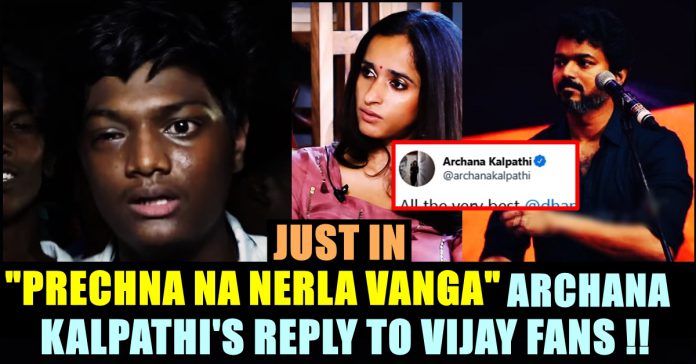 Bigil, one of the most anticipated film of the year, is expected to release on Festival day of Diwali. The audio launch which took place recently added fuel to the anticipation of fans. Vijay, the lead of the movie is the only reason for all these noise which we all know. The film is based on women’s football and is touted to speak highly of women and freedom.

Right from addressing each and every person in the film by their names to requesting fans to use social media responsibly, Vijay struck the right chords with the audience. The actor even spoke about Subashree, a young woman who recently died in Tamil Nadu after an illegally placed hoarding fell on her scooter and killed her. He offered his condolences to the family and asked fans to put hashtags and trends to a better use. The audio launch was officially streamed on Sun Tv after two days after.

The audio launch took place at Sri Sairam engineering college. Fans from all over state wished to take part in the audio launch to witness the speech of actor Vijay. Unfortunately fans of the actor who took part in the audio launch seemed to be disappointed due to the fact of getting beaten by policemen. To control the crowd, police conducted “Lathi-charge” on the fans. When one of a fan raised question against the policemen, they reportedly asked the fans to question the production house for providing 20,000 tickets to a hall which has capacity of having only 10,000 people.

Now, in a way of replying to that allegation, Archana Kalpathi, creative producer of the film has revealed the that tickets were not sold at all. She made it clear that they were absolutely free. She also said that the auditorium was allotted majorly for the friends and relatives of the people who worked in the film.

“If 1000 people worked in our film, we expect their family members to attend the audio launch function. Other tickets were issues for the fans which was fakely printed by few. They sold it for money and it caused the entire problem. Even Vijay sir, wouldn’t like to harm him fans. When things get out of hand, the only thing we could do is to apologize.” says Archana Kalpathi.

She also talked about other issues including the plagiarism accusation of an Assistant Director, KP Selva. Regarding the teaser update, Archana said that it is not ready yet, and she couldn’t do anything about it.