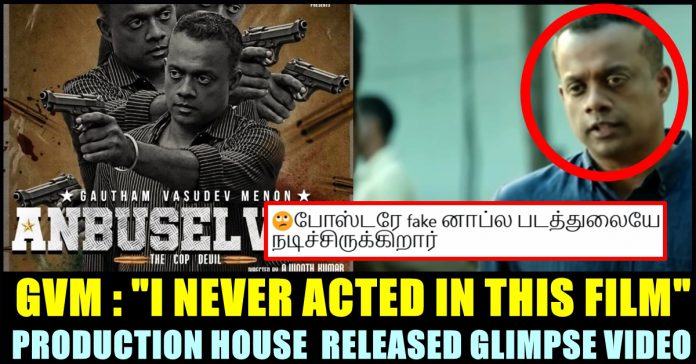 Director Gautham Vasudev Menon’s reply tweet to a poster released by Pa. Ranjith shocked fans as the former denied acting in the film named “Anbuselvan”. The poster suggested Gautham playing lead role as a cop and the design was made having him holding gun in different dimensions. Pa. Ranjith released the poster of “Anbu selvan” saying that he can’t wait to witness the action packed spell of Gautham Menon. To our shock, Gautham completely denied meeting the person whose name was credited as “filmmaker” and said that he is not at all aware of such project. He also expressed his shock over the producer having Ranjith to release the poster.

Known as one of Tamil cinema’s prolific filmmakers, Gautham menon is also active acting in films in supporting roles. The role he played in “Kannum Kannum Kollayadithaal” of Desingh Periyasamy lauded by the fans and critics. He went on to act in several other films and web series including Rutha Thandavam” of Mohan G.

Pa. Ranjith who enjoys 1 million followers for his twitter handle, has been promoting films to help them gain wider reach. On Wednesday, he came up with a tweet releasing the poster of “Anbu selvan” which had Gautham Vasudev Menon in the lead role. “Here’s the first look of #AnbuSelvan So much of intensity and impact indeed. Can’t wait to watch the action packed spell of @menongautham Best wishes to all” said Pa. Ranjith and tagged the producer, filmmaker and music director of the film.

Immediately reacting to the tweet, director Gautham Vasudev menon came up with a tweet saying that it is a shocking news for him. The filmmaker who said that he has no idea what this film is, also made it clear that he never met the director whose name was used in the poster. Expressing his shock over the producer having Pa. Ranjith on board to tweet about the film, Gautham said that it is shocking and scary to see something like this happening so easily.

This is shocking & news to me.I have no idea what this film is that I’m supposed to be acting in.I don’t know or haven’t met the director whose name is on this poster.Producer has got big names to tweet this. It’s shocking & scary that something like this can be done so easily. https://t.co/CnMaB3Qo90

Now, the production house came up with a glimpse video which shows Gautham acting in one of the scenes as a cop. In the scene which looks like rush, he asks Vivekh Prasanna whether he got involved in a land snatching. Accepting the same, Vivekh asks Gautham whether he belongs to a particular caste. Using his trademark “Kadaa”, Gautham punches Vivekh in his face and leaves him in blood shed.

Check out some of the reactions the post received :