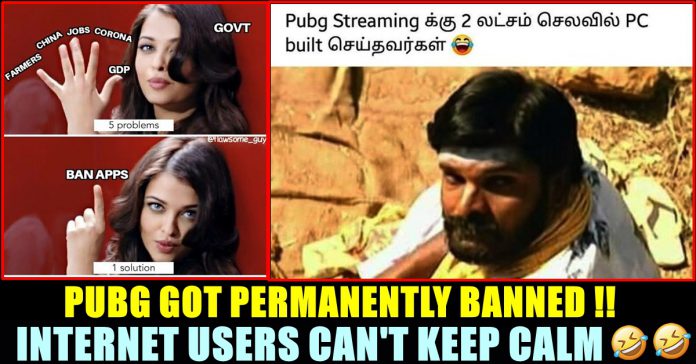 Months after banning the micro video posting app Tik Tok, Central government has banned the widely played controversial game Pub-G along with several other mobile applications in India. This action was taken by the Indian government amid the tension over China’s provocation in Ladakh. There are more than 33 million PUB-G players are actively playing the game. The game clocks 13 million daily users, reports suggested.

Earlier, Indian government has banned 59 chinese mobile applications, including top social media platforms such as Tik Tok, Helo and We Chat. to combat the threat posted by these applications to the country’s “sovereignty and security”. UC browser and shopping app club factory are the other prominent apps that have been blocked amid rising tension between India and China following clashes at the border months ago. Now, along with PUB-G and Ludo, government has banned 118 mobile applications.

“In the interest of sovereignty and integrity of India, defence of India nd security of the state. And using the sovereign powers, the Government of India has decided to block the usage of certain apps, used in both Internet and non-mobile Internet enabled devices. These apps are listed in the attached appendix” the Ministry added.

Here’s the apps that are blocked :

As soon as the report surfaced, users of PUB G got dejected and reactions are pouring from all the directions of the Internet. Check out some of them below :

When you ban #PUBG but then you realize what if they start asking for jobs.
.
.#pubgbannedinindia pic.twitter.com/D6nZp8nJjU

Reporter – Are you unhappy with the government's decision of banning #PUBGMOBILE ?

So now everyone talking about #PUBG and not GDP

#PUBG got banned.
Me who never played PUBG – pic.twitter.com/M1prmJNeDY

Will Narendra Modi Gov bann this Apps too?

Tiktokers watching the name of #PUBG in the latest list of apps banned by the Government: pic.twitter.com/uz55cc5lNe

me (a retired counter strike player) who never played #PUBG, silently enjoying the panic and outrage among the PUBG lovers after its ban: pic.twitter.com/FK4hK4UxP1