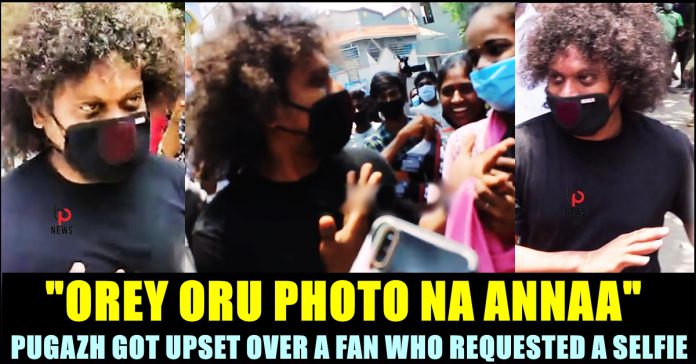 Video of Pugazh getting upset over a fan who requested him to pose for a selfie while he was going to attend the funeral of legendary actor Vivekh went viral in social media platforms. To the fan who could be heard requesting him repeatedly, Pugazh politely questioned how he could ask for a selfie in a place where people are grieving for the demise of a talented actor and environmentalist.

Celebrities who couldn’t attend the funeral uploaded videos in their social media handles and expressed their grief. Actor Nakkhul, after uploading a video, planted a tree in the memory of actor Vivekh and named it as “Mangalam” which is a character name of the actor in Nakhul’s debut film “Boys”. Vadivelu released a video shedding tears for the demise of his dear friend with whom he worked in several films.

Aspiring comedy actor “Pugazh” who rose to fame among audience through his stint in Vijay TV”s “Cooku with Comali” show also arrived at Vivekh’s house to pay his last respect. Many people who were present at the spot, clicked pictures and videos of him while he was walking to attend the funeral. A fan went one step ahead and started requesting him to pose for a selfie.

Videos of many other people following him and to take selfies were also surfaced in social media platforms.

On the wee hours of Saturday, actor Vivekh who predominantly appeared in Tamil films, died in the hospital after suffering a cardiac arrest. On the morning of Friday, an unconscious Vivekh was brought to the SIMS hospital in Chennai. He reportedly suffered a cardiac arrest due to a 100% blockage in heart vessel.