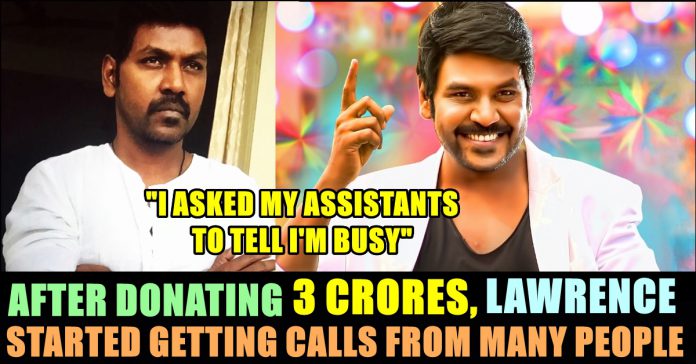 After donating a whopping amount of Rs. 3 crore as a relief fund for coronavirus disease, Raghava Lawrence, a renowned actor, director, dance choreographer came up with a long note explaining what happened to him. Lawrence says that he is getting so many calls from fighters union and from assistant directors and from many others asking him to extend his contribution. The actor who got dejected has said that he will make an announcement on 5 PM regarding the extension of his contribution after discussing with his auditor.

Among the 3 crores, Raghava Lawrence said that he is going to donate 50 lakhs to PM cares, 50 lakhs to CM relief, 50 lakhs to dancers union, 25 lakhs to physically abled boys and 75 lakhs to the daily labour’s and for the people from his birthplace Royapuram, Desiyanagar. As soon as he announced it, Lawrence seems to be receiving phone calls from other workers from various field to seek help which made him to make his assistants tell that he is busy.

“After this donation, I’m getting many calls from fighters, assistant directors and many more asking me to extend my contribution and I’m also receiving many letters and videos from public. When I see all this it’s very heartbreaking. My contribution of 3 crores won’t be enough for all this. So honestly, I thought I won’t be able to contribute more so I asked my assistants to reply to the calls and letters saying that I’m busy.” said Raghava Lawrence who also added that he felt really bad for what he did.

“I wasn’t able to sleep last night and I was very disturbed thinking about the videos and the public crying. After thinking about it deeply I got a thought that, we brought nothing when we came to this world and we will take nothing with us” he said and believed that he got important a service to do. Raghava Lawrence had said that decided to do his best for public and government. “I will discuss with mu auditor and well wishers about what I’m going to do and with all your blessings I will announce it today evening at 5 pm” his statement read.

Being a cinema professional who donated the highest amount comparing to all, it seems Raghava Lawrence is going to extent his contribution after seeing the videos he received. His selfless nature always gained him luck which is evident through his latest announcement about his upcoming venture. Raghava Lawrence’s next film is going to be the sequel of Rajinikanth’s blockbuster film Chandramukhi and he is also committed in the remake of Telugu blockbuster “Rangasthalam” which is going to be directed by Linguswamy. He is currently directing Akshay Kumar in the Hindi remake of his “Kanchana”

Let us wish Raghava Lawrence to have a complete success in all his upcoming ventures for his kind heart !!