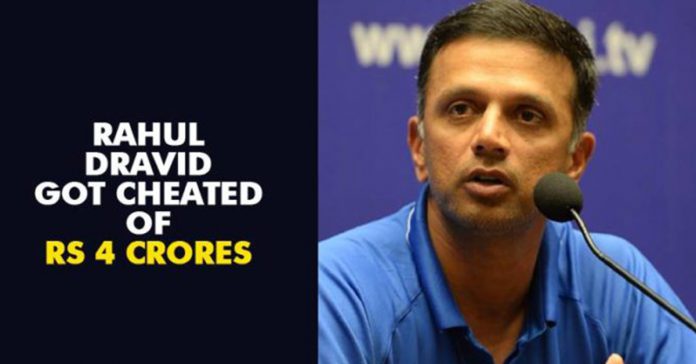 Former Indian cricket team captain Rahul Dravid has lodged a complaint against a Bengaluru-based firm for allegedly cheating him of Rs 4 crore, police said. “Dravid had lodged a complaint with us two days back against Vikram Investment Company for cheating him of Rs 4 crore,” Sadashivanagar police inspector Naveen told PTI here. Though there were reports of many sportspersons and other celebrities being duped by the company, Dravid has been the first to lodge a complaint. A couple of weeks ago, the police had arrested five persons, including a former sports journalist, for allegedly duping several people of crores of rupees through Vikram Investment Company. As Rahul Dravid Well, had invested a whopping 20 crores in the firm, he was promised of higher returns. Unfortunately, he didn’t even get the full principal amount back.

According to Indian Express , The former Indian cricketer has alleged in his complaint that he made the investments at the behest of one of the agents of the firm, Sutram Suresh, a former sports journalist, who is among five people linked to Vikram Investments and has been arrested. Rahul Dravid isn’t the only one to get duped; as of now, the company has done fraud with over 800 investors and the amount is around 300 crores. The alleged case of cheating against the decade-old firm emerged after an investor P R Balaji, 48, the owner of an agarbatti company, filed a complaint before Banashankari police on March 3, accusing Vikram Investments of cheating him of Rs 11.74 crore. Since the complaint was filed by Balaji, dozens of other investors have also approached the police.

In the complaint, Dravid said that the firm had assured him of 40-50 percent annual returns. Along with Dravid, even big names like Prakash Padukone, Saina Nehwal etc faced the brunt.

Badminton star Saina Nehwal, who is also reported to have invested in the firm, has not lodged any complaint till now. According to police, the owner of the firm has diverted funds to foreign countries. Advocates for the agents told the court last week that they worked purely on a commission basis and that the misappropriation was carried out by the proprietor Raghavendra Srinath, with whom all the funds were vested.