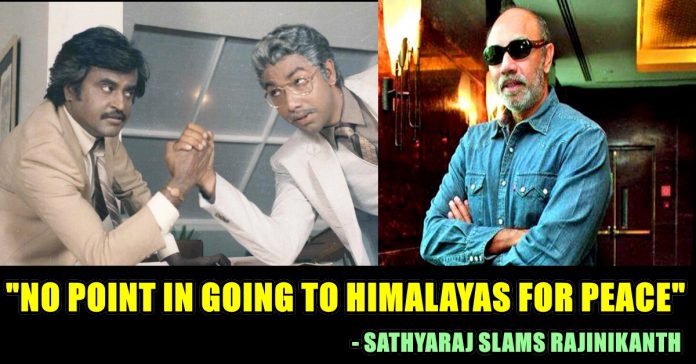 Nearly a week after Rajinikanth courted controversy with regard to his comments he made after he met the families of those injured in the May 22 police shootings in Thoothukudi, actor Sathyaraj has taken a dig at the Rajini Makkal Mandram chief. On May 30, the actor-turned-politician drew much criticism after he said that anti-social elements had infiltrated the anti-Sterlite protests, that led to the deaths of 13 civilians. In what is widely being perceived as a dig at this comment, actor Sathyaraj said on Sunday, “As far as I know, spiritual politics is not controlling with iron fist, it is embracing with affectionate hands.” In a reference to Rajinikanth’s frequent visit to the Himalayas, he added, “But what is it to us? Are we going to some mountains in search of peace? We have studied here in Periyar Thidal, so (pointing to his head) it is clear. I’m already peaceful. I don’t have to go anywhere. When I brush my teeth in the morning, I do so peacefully. When I shave, I shave peacefully. When I eat idli-dosa, I do peacefully.”

The actor was speaking at an event celebrating DMK patriarch M Karunanidhi’s birthday on June 3.

Commenting on the slew of actors who have turned to politics following the death of former Chief Minister J Jayalalithaa, he said, “Politics is social service. Politics is something that you enter into without expectations, without thinking what will happen to my future, what will happen to my business, whether I will go to jail or not. That is social service. Calculated entry is not politics, it is business. For example, if we’re thinking of starting a hotel business in Vepery, what will we plan? Will a vegetarian hotel be good or a non-vegetarian hotel? What is already there in vegetarian and non-vegetarian? Can we add Chinese? What can of business is likely to run here? Has any hotel shut here and created a vacuum? That kind of calculation is called business. That is not called politics,” he said. The actor added, “We should not give some or the other name for that business. That is just a business. If it’s politics, one has to just jump into the field. If you know there is some injustice, it has to come from within- that is politics. You should not enter a business and then give it some name. Spiritual politics is one name for the business.”

What’s your view on Sathyaraj’s Statement ??