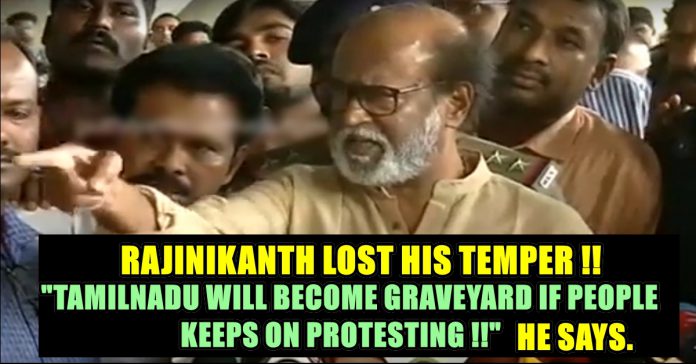 The peaceful people’s protest against Sterlite Copper in Thoothukudi became violent on its 100th day, leading to the killing of 13 persons in police firing, due to the infiltration of anti-social elements into it, actor Rajinikanth said on Wednesday.

The anti-social elements should be crushed with an iron hand like late Chief Minister Jayalalithaa did, Mr. Rajinikanth told reporters at a private resort on the outskirts of the coastal town after meeting those injured in the police firing, at Thoothukudi Medical College Hospital. “The protest carried blood stains on it only after anti-social elements infiltrated into the agitation. The government, following the footsteps of Ms. Jayalalithaa, should crush the anti-social elements with an iron hand. If not, it will pose a serious threat to Tamil Nadu”, he said.

On behalf of Rajini Mandram, it was announced that ₹2 lakh each would be given to the families of police firing victims and ₹10,000 to the injured. Though the office-bearers of his fans organisation brought the family members of eight people killed in the police firing to the resort, they were not allowed to meet the actor. Mr. Rajinikanth appealed to the public not to resort to agitation against every industrial investment being made as it would effectively seal employment generation in Tamil Nadu, where farming had been almost wiped out due to water scarcity. Hence, people should be cautious about the protests being promoted against industrial investments.

While the governments should give the permission for establishing industries after carefully following all norms, those who were dissatisfied with such investments should approach the court to get legal remedy as protest was not the solution. “If the Sterlite Copper administration approaches the court in a bid to reopen its closed down unit, they are not human beings… As human beings (judges) are in the court, the company cannot get legal remedy there and the government should not allow that attempt to succeed. Nothing can win over people’s power,” Mr. Rajinikanth said.

On the Dravida Munnetra Kazhagam’s protest against the State government in the Sterlite issue and its decision to boycott the ongoing Assembly session, the actor said the DMK was politicising everything and the people, who were closely watching it, would teach a fitting lesson.

Asked if he would seek the resignation of the Chief Minister in the wake of the killing of 13 persons in police firing, the actor said he did not seek it as it was not the solution.

When asked about the commission constituted by the Tamil Nadu government to probe the Thoothukudi police firing, Mr. Rajinikanth said he was not satisfied with the move.