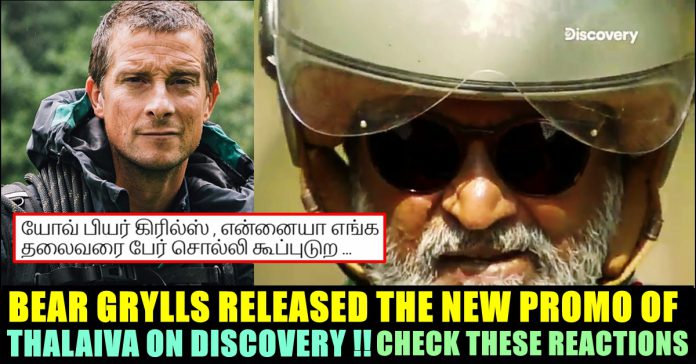 The most waited episode of Man vs Wild which is going to feature Superstar Rajinikanth is slated to stream on 23rd of March. The promo released on Sunday and is going insanely viral in the social media platforms. Super star Rajinikanth made the headlines once again after the news of himself taking part in the survival program Man Vs Wild surfaced. The show which is popular among the fans across the world, is about Bear Grylls helping people to understand how to survive in forests. Bear Grylls, is a British former SAS serviceman, survival instructor, and honorary lieutenant-colonel, and, outside his military career, an adventurer, writer, television presenter and businessman. He widely known for his show Man Vs Wild which is getting its telecast in Discovery channel.

The recently released promo shows Rajinikanth spending time with Bear Grylls in forest. The promo video which was edited in a movie teaser’s pattern impressed the audience big time. Fans of actor Rajinikanth are celebrating it in the social media platforms. Bear Grylls sharing the video in his official twitter account wrote “Superstar Rajinikanth’s relentless positivity and never giving up spirit was so visible in the wild as he embraced every challenge thrown at him. Respect! Watch Into The Wild with Bear Grylls on March 23 at 8:00 pm.”

Superstar @Rajinikanth’s relentless positivity and never giving up spirit was so visible in the wild as he embraced every challenge thrown at him. Respect! Watch Into The Wild with @BearGrylls on March 23 at 8:00 pm. @DiscoveryIN #ThalaivaOnDiscovery pic.twitter.com/s9PodYGv05

After Prime Minister Narendra Modi, Superstar Rajinikanth nodded to take part in the adventurous show. Since the announcement, fans of the actor are very much excited to witness their “Thalaivar” in a new avatar. It is notable that it is Superstar Rajinikanth’s television debut. Rajinikanth did shooting for the special episode in forests around Karnataka’s Mysore.

As soon as Bear Grylls released this video in his official Twitter account in which he enjoys more than 14 lakh followers, fans of the actor came up with few requests. Few of them asked if there is a possibility for the show to have a theatrical release. Few even asked Bear Grylls not to call him as “Rajinikanth” but as “Thalaivar”

Release this show in #theatres so that we could all watch it together & celebrate 🎉😍@DiscoveryIN If possible arrange a screening for the show, it would be great ❤️#Thalaivar #Rajinikanth #BearGrylls#IntoTheWildWithBearGrylls #ThalaivaOnDiscovery pic.twitter.com/29QJ0G8fDj

Whats the procedure to screen it in theatre🔥😁#ThalaivaOnDiscovery

Comment your views on these requests made by the fans of actor Rajinikanth !!