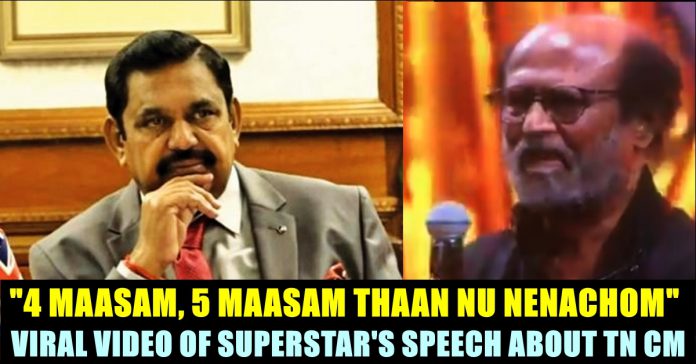 The grand event of Kamal Haasan’s 60 years in film industry took place at Nehru Indoor Stadium and completed successfully with the participation of many stars from Indian film industry. Starting from Vijay Sethupathi to Superstar Rajinikanth, almost every stars of Kollywood took part of the event and made it a success.

In the event music maestro Ilayaraja performed and Oscar winner A.R Rahman attended the show. Comedy actor Vadivelu who was not seen in any grand events in recent times, gave his presence in the show only to make the stadium erupt in laughter with his humorous speech.

The most awaited part of the event is the speech of Superstar Rajinikanth, a dear friend of Kamal Haasan since his debut in Tamil film industry. As the political party of Kamal Haasan, Makkal Neethi Maiam is marching towards its 2nd birthday, Rajinikanth who announced that he is going to enter politics in the end of 2017, is yet to launch his party officially.

Now the actor who fondly called as Superstar by his fans, has took a sly dig at Chief Minister Edappadi Pazhaniswamy in the event. In his speech, Rajinikanth has said that miracles do happen in a human’s life. To elaborate on the same, he narrated the incident of Edappadi Pazhaniswamy becoming the chief minister of the Tamilnadu state and ruling it despite of the belief about his party being dismantled within few days.

Watch the glimpse of his speech here :

“99 % of people thought that the ruling of Edappadi won’t last more than 4 or 5 months. But his party is still ruling the state by surpassing the barriers which means that Miracles do happen.” said Rajinikanth in the event and further added that miracle will happen in coming days as well which made followers of him in the stadium go gaga.

Further Rajinikanth lauded Kamal Haasan for his achievement in film industry. According to reports Rajinikanth said that his struggle as conductor is nothing compared to the struggle of Kamal Haasan who worked as barber in his earlier days. “He reached his position with hard work” said the Superstar about his dear friend.

Check out some of the reaction for Rajinikanth’s speech in yesterday’s event :

#Rajinikanth is the only person

What he come for the function & he Done for his Guest Role.

Many actors speak about Political Matters indirectly on stage ! But #Superstar #Rajinikanth only one person speak directly with Mention particular people name (EPS) !

What do you think on this speech of rajinikanth ?? Comment your views below !!