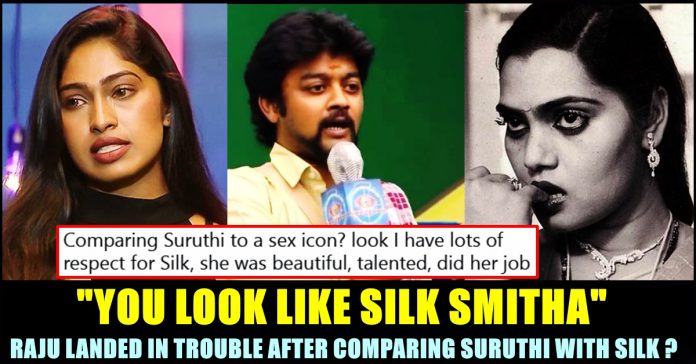 Bigg Boss contestant Raju’s statement comparing Suruthi with legendary actress Silk Smitha Created debate among the users of online platforms. Ever since Raju became one of the most loved contestants of the house, he came under scanner and each and every word he utters is being noted by the viewers of the show. Most recently, he grabbed headlines after asking Pavni whether she would allow him if he tries to take her coin while she was changing her clothes. Now, during a debate task on “rural” or “urban”, a comment made by Raju comparing Suruthi with Silk Smitha has created a discussion in Twitter.

With a set of people supporting Raju arguing that the aspiring actor has said it in a right manner, few could be seen criticizing him alleging that he objectifies Suruthi based on the clothes she wears. Raju who rose to fame after appearing as a student in Vijay TV’s serial “Kanaa Kaanum Kaalangal”, went on to act in other serials as well. He played one of the leads in Kavin’s “Natpuna Enna nu Theriyumaa” and was playing “Kaththi” in “Naam Iruvar Namaku Iruvar” serial.

Raju identifies himself as one of the students of legendary filmmaker K Bhagyaraj and also worked with Director Nelson dileepkumar since his “Vettai Mannan” days. After entering Bigg Boss house as a contestant. Raju started winning hearts through his timing counters and mimicry abilities. He who formed as an entertainer inside the house, handles the problems he faces inside the house in a composed way. He got appreciated by Kamal Haasan for the way he approaches each and every contestant in the recent weekend episode.

Now, on the 25th day, contestants were parted into two groups and were asked to debate on which is best between “rural” and “urban”. During his turn, Raju argued that Suruthi forgot her native. “Every body got their rights to wear the clothes they like. Her clothes and attire looks good on her and she indeed looks beautiful like actress Silk Smitha. But only while talking with me, she tends to talk in a rural slang. But while talking with others she changes her slang and talks accordingly” Raju said.

Why Raju why?
Why did you start this outfit topic?
😏😏😏#BiggBossTamil5 #BiggBoss5Tamil pic.twitter.com/tUax5P4ixj

“Due to that reason, I feel that she left her identity behind and entered this Bigg Boss house. If we take me as an example, people would easily find that I come from a village, no matter how much I make my self up. Madhumitha asked “Are you from village ?” right after meeting me. So I feel that she forgot her identity in this house, I don’t know about outside, don’t take my words in a wrong way” he added.

The way Raju brought actress Silk Smitha in his speech created a debate among the online users who watch the show keenly. “Comparing Suruthi to a sex icon? look I have lots of respect for Silk, she was beautiful, talented, did her job well, but the industry sexualised her at a very young age, used her only as an object of men’s desire, so this is not a compliment. It’s creepy Raju.” a user commented whereas another one said “Dude just casually passed a comment that Suruti looks like Silk Smitha in modern dress. Don’t know what the hell that is suppose to mean”

Comparing Suruthi to a sex icon? look I have lots of respect for Silk, she was beautiful, talented, did her job well, but the industry sexualised her at a very young age, used her only as an object of men's desire, so this is not a compliment. It's creepy Raju. #BiggBossTamil5 https://t.co/YhLV2ykYKE

Many from the cinema industry have expressed their love for Silk Smitha as a kind human being & great actress.

But let's not forget that here Raju spoke under the topic of dressing & given his past comments, it didn't sit well with me.🖐️#BiggBossTamil5pic.twitter.com/iqGdKuLBNH

Raju if he said to Suruti that she looks like Silk Smita citing her dressing sense .To insult her . It's a not N I look it as compliment to Suruti. Silk is more than glamour. #BiggBossTamil5 #BiggBoss5Tamil

Raju spoke well in the debate apparently according to many. Dude just casually passed a comment that Suruti looks like Silk Smitha in modern dress. Don't know what the hell that is suppose to mean.
🚩🚩🚩🚩🚩🚩🚩#BiggBossTamil5

LOL. Raju Bhai fans twisting & turning about the Silk Smitha comment.
We don't look down on Silk Smitha as just a sex symbol, Raju does, which is why he said what he said. Muttu kodakanum solittu losu matri olarathinga ra. Context is important here. #BiggBossTamil5

I am not sure in what sure in what sense raju meant it, but silk is what every woman would aspire to look like 🥵❤️ I would gladly take it as a compliment. Her name shouldn'tt be used a bad reference anymore, she's a QUEEN ❤️ #BiggBossTamil5 pic.twitter.com/7ghwwQlwA9

Raju spoke good about suruthi but why that silk smitha reference ? It seems something sarcastic #BiggBossTamil5

In village if you walk around wearing a crop top, it will be a talking point between people, becoz the only place they see modern dress is cinema, so Raju's silk comparison is acceptable
It doesn't mean they are bad, they are conditioned that way.#BiggBoss5Tamil #BiggBossTamil

After watching their biopics, I’m obsessed with Silk Smita and Savithri.

Both are icons in the cinema world.

I understand why Raju compared Suruthi to Silk.

Can you see what I see?

#biggbosstamil5 Ciby had no problem when raju made a very snide comment comparing suruthi to silk Smitha. With all respect , silk life was tragic and horrific. No girl should have such pain, ciby only targets thamarai for silly dress comment . He can’t ask raju for silk label

Some #Ghaju fans even now are defending his #SilkSmitha comment.

The way he jus pronounced “Siluku sumitha” with a tone says it all.
Showed how much he respects Silk n what he meant by that comment.