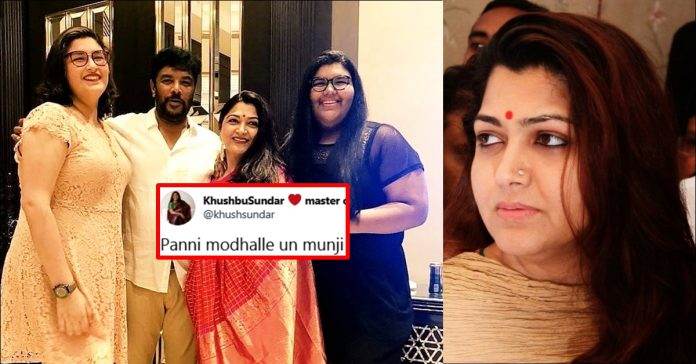 Social media don’t know value of the emotions expressed by the celebrities in online medium. Many high profile celebrities got trolled and abused by random social media users. Some would post their pictures and would never turn back due to the intolerance of abusive comments and the other would give them back right away.

Kushboo Sundar who is known among Tamil audience for her onscreen appearance, made an abuser taste his own medicine by making him to delete his own tweet.

On 28th of october, Kushboo, uploaded a series of pictures of herself with one of her daughters in her official twitter account. Through the pictures, we can see that they are the pictures of their Diwali celebration. Kushboo, in her post wrote, “My baby doll @AnanditaSundar miss my other doll #Avantika.. #Deepavali #Celebration #Familytime #memories”

Many wished her the best on seeing these pictures and appreciated the pictures she posted. But one of a random follower of Kushboo, abused the daughter of Kushboo in a cheap manner which made Kushboo extremely angry.

Actress Kushboo Slapped A youth For Trying To Misbehave With Her ?? Video Goes Viral !!

Though the user deleted his tweet after it started getting more attention from the Netizens, screenshot of the same is going viral in social media.

Here’s the screenshot of what he wrote in the reply section of Kushboo’s post :

Check out her reply here :

Radhika Sarathkumar stretched her supporting hand to Kushboo by slamming the abuser. Here’s what she wrote in her tweet :

Filmmaker Arun Vidhyanathan also tweeted a message to Kushboo by asking her ti ignore such people in social media. Here’s what he said :

She is beautiful @khushsundar madam. The price for being a celebrity is sometimes way expensive. I recently saw her at Starbucks..well behaved and very quiet. God bless her. Ignore negativity and [email protected] – My best wishes for her to reach bigger heights! https://t.co/alqkNP78Hd

Kushboo Sundar is an Indian film actress, producer and television presenter who has acted in more than 200 movies. She is predominantly known for her work in the South Indian film industry. Khushbu joined the Indian National Congress on 26 November 2014 after meeting with then Congress President Mrs. Sonia Gandhi, and then Vice-President Mr. Rahul Gandhi. She is currently the National Spokesperson of the INC.

Comment your views on the cheap behaviour of the Internet user !!