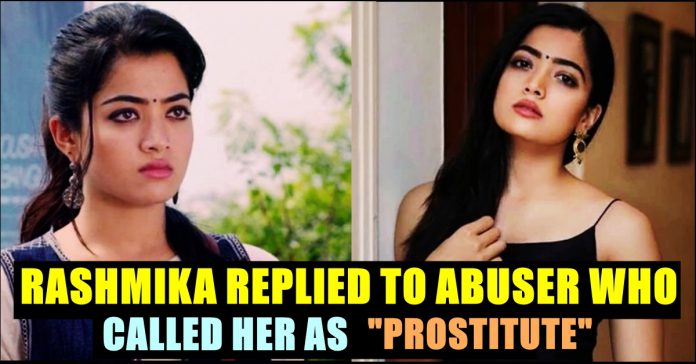 Rashmika Mandanna is one of the very few actress who got fame and place in the hearts of many fans in a very short span. Despite being part of very few films, the number of fan pages in social media for the actress is sky level. The Geetha Govindam actress is one of the first candidate who believed to be paired with actor Vijay in “Bigil” but Nayanthara grabbed the role and the film is running successfully in theatres now.

Rashmika Mandanna who rose fame to Tamil fans through the song “Inkem Inkem” song from Telugu “Geetha Govindam” is very much popular among Tamil fans for the fan pages she enjoys. Unfortunately Internet is not a place which has always been nice to people especially for celebrities.

Internet trolling is something which is almost every celebrity in the world are facing in daily basis. Some won’t mind and react to the trolls they are receiving but some will get offended and give it back to the trollers right away. Now in a compilation of a childhood picture of actress Rashmika. a meme page has abused the actress as “Prostitute”.

Rashmika Got Frustrated & Slammed This Online User In Public !! Check Why !!

The actress couldn’t resist herself from reacting to that abuse and took her official Instagram account to give it back to the trollers. In one of her story she wrote “I don’t know what you guys get out of doing this to us actors. Is it because we are a soft target to you? Public figure doesn’t mean you can target us ruthlessly. A lot of you keep saying ignore the bad comments or trolls and I generally do. Say anything you want about our work- you have the right…but no one has any right to say anything about our families or our personal lives. No actor deserves this crap. Because let me tell you this – being an actor is not easy – each and every profession deserves utmost respect. Congratulations who ever did this. You’ve managed to hurt me, didn’t think of you were capable of doing that but what’s to follow is on you. #saynotosocialmediaharrasment.”

Check out the screenshot of the story she posted :

Not only for onscreen appearance, Rashmika is also known for her bold statements. Being very much interactive with her fans in social media platforms, Rashmika defended her fans from her haters as well.

Rashmika Mandanna who initially worked as an Indian model and actress who appears predominantly in Kannada and Telugu films. She starred in the commercially successful 2016 film Kirik Party, is one of the most popular and highest paid actresses in South Indian cinema and also the recipient of several awards, She popularly dubbed by the media and Kannada film industry as the ‘Karnataka Crush’. Bangalore Times placed her first place in the list of ’30 Most Desirable Woman of 2017′. She is one among very few actresses to enter Tollywood ₹100 crore club in a short span.

What do you think on this reply from the actress ?? Comment your views !!