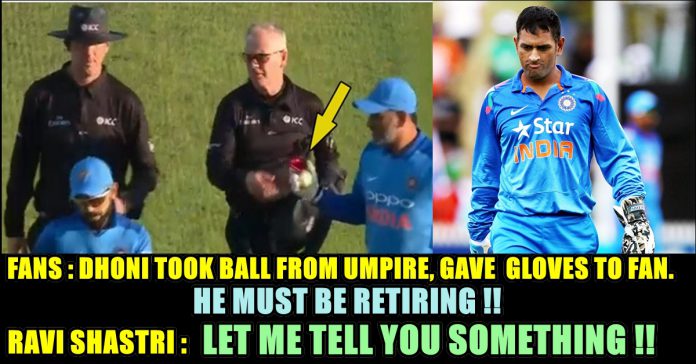 Team India coach Ravi Shastri on Thursday dismissed all speculations about whether Mahendra Singh Dhoni was retiring or not. Shastri’s comments came after social media on Wednesday was abuzz with speculations that the 2011 World Cup winning captain MS Dhoni will soon retire from all formats of the game. Dhoni was seen taking the match ball from the umpires at the end of the third one-day international against England at the Headingley cricket ground in Leeds on Tuesday, and Twitter went on overdrive as fans began to wonder about the significance of the move.

Here’s the video of the MS Dhoni taking the ball from umpires after the game. #ENGvIND pic.twitter.com/C14FwhCwfq

Shastri said Dhoni took the ball from umpire to show it to bowling coach Bharat Arun.

Dismissing the speculation, Shastri said: “MS wanted to show the ball to Bharat Arun. He wanted to show him the wear and tear the ball had endured, to get a general idea of what the conditions were like.” “But right now, all this clamour is nonsense. He just wanted to show the ball to Arun to just have a look at it after close to 45 overs had been bowled,” Shastri told Times of India. Recently, Dhoni added another feather to his illustrious cap as he became fourth Indian and 12th overall in ODI history to score 10,000 runs. The former India skipper achieved the milestone during second ODI against England at Lord’s. Under Dhoni’s captaincy, India lifted the 50-over World Cup in 2011 and the World Twenty20 in 2007. Dhoni also led India to the ICC Champions Trophy in 2013 in England.