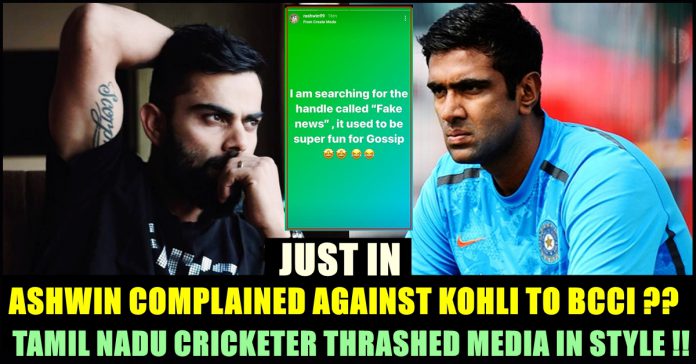 Tamil nadu based Indian spinner Ravichandran Ashwin reacted to the news reports that were doing rounds for the past two days, reporting about Ashwin’s role in Virat Kohli stepping down from captaincy. It was reported that Ashwin complained against Kohli’s captaincy to the Board of control for cricket in Inda and it led Kohli to step down from T 20 captaincy.

Brushing off the reports, the spinner, came up with a couple of stories in his official Instagram account, trolling IANS which reported about the news first and also the news portals which took quotes from them. He sarcastically said IANS renamed their portal name from “Fake News” to denote that the reports were fake.

Couple of days ago, A number of shocking reports surfaced saying that India’s senior player Ravichandran Ashwin complained to the Board of control for cricket in India about Kohli’s captaincy. It was also reported that Kohli accused Ashwin of showing “no intent” during the finals of the World Test Championship that took place in Southampton, England. The news reports linked Kohli benching Ashwin in the England test series with their latest theory of Ashwin complaining about his captain.

It all started after the Delhi born cricketer who scored 70 centuries in International cricket so far, announced that he will be stepping down from captaincy in T 20 cricket post the world cup tournament. The cricketer said that he needs to give space to himself as he was captaining the team for the past 5,6 years in all the three formats. He cited work load as a reason for his decision which made headlines across the globe.

In a recent report, IANS reported that Ravichandran Ashwin has been named as the senior player who complained to the BCCI about Virat Kohli’s captaincy. Ashwin reportedly complained against Kohli for making him feel “insecure” and for accusing him of “not showing intent” during the finals of World Test Championship against New Zealand. Several other media portals started taking quotes from IANS as soon as the news surfaced.

Many fans started tagging Ashwin in Twitter and demanded him to answer on the same. Now, in a way of putting full stop to all such reactions, Ashwin came up with a couple of stories in his official Instagram account where he enjoys 3 million plus followers. “I am searching for the handle called “Fake News”, it used to be Super fun for gossip” Ravi Ashwin said in his first story. Here’s the screen shot :

The cricketer went on to add “Oh Yaaa !! Thank You guys. Found them : I just heard they have renamed themselves and are now called IANS and some other take quotes from them too. Super fun” to troll the media portal which reported it first. Check out the screen shot of his second story below :

Known for his sarcastic replies and witty social media posts, Ashwin, in his own way, made it clear that there is nothing cooking between himself and Virat Kohli. These stories of the cricketer goes viral with netizens slamming media portals which reported about the news on Ashwin complaining against Kohli. Comment your views on this reply of Ashwin to the rumours !!