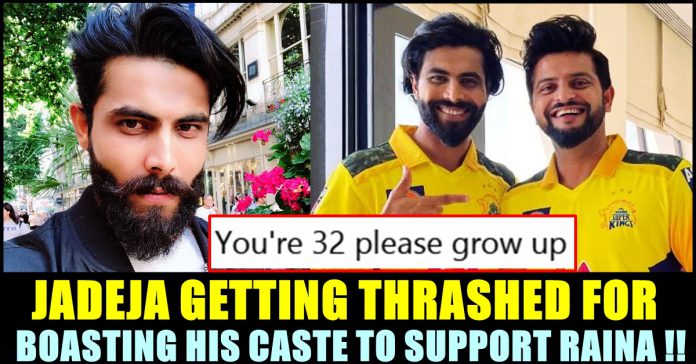 Followed by Suresh Raina who said that it feels easy for him to embrace the culture of Chennai as he is also a Brahmin, another Chennai Super Kings player Ravindra Jadeja came up with a tweet boasting his caste. He is facing the heat of majority number of social media users and is receiving support from a group of people as well. Ravindra Jadeja already caught in controversy for identifying himself as a proud “Rajput” boy through his social media posts and captions. Now, the tweet he uploaded had polarized users of social media platforms.

While the hashtag “I Support Raina” is being trended in Twitter by people who find no problem with Raina feeling proud about his caste, the tweet of Ravindra Jadeja got surfaced in his timeline of the micro blogging social media site. “RAJPUTBOY FOREVER. Jai hind” read the tweet of the left hand all rounder.

It all started when Raina linked the people of Chennai with Brahmins. The cricketer who is playing for the Chennai based team since the inaugural season of IPL tournament, made the controversial statement when he was asked to tell about how he is embracing the culture of Chennai city. His opinion irked a number of fans who believe that Chennai is known for its diversity and expressed their disappointment over the ignorance of Raina who is playing for the city for more than 10 long years.

In a recent interaction with media, Raina was asked to comment on how he embraces the culture of Chennai. “We have seen you in Veshti, We have seen you dance and all and have seen you whistle, how have you embraced the Chennai culture ?” asked the anchor to Raina. Replying to him, Raina started with “I think I am also Brahmin. I have been playing since 2004 in Chennai. I love my teammates”. The way he linked the entire city with Brahmin community shocked a number of social media users as they believe that Chennai is a place that belongs to the people of all communities.

Twitter divided with people started expressing their views supporting and opposing the cricketer. Amidst the controversy, the tweet of Ravindra Jadeja who also plays for Chennai has added fuel to issue. “The audacity that these cricketers have absolutely unbelievable Raina the other day and now this guy who calls himself a proud Rajput boy in every other tweet” a twitter user wrote to express his disagreement whereas Tamil you tuber Madan Gowri uploaded a tweet questioning “Rajput is a caste right ?” with a face palm emoji.

We could also see people supporting Jadeja for his stance. Check out some of the reactions for the tweet of Jadeja below :

Imagine being a world class cricketer, and still using your caste as your whole identity 🤕 ew https://t.co/fMLcryrKul

Rather Than Playing for India this Casteist Termite should play for some Rajput Team
His Education Qualification – Unknown
Prime Example Why Education is important @Profdilipmandal @Dr_Uditraj @KDanishAli#मैं_सर्वप्रथम_भारतीय https://t.co/tScNORUDAG

32 year old grown ass man being a casteist troll on twitter, don't you have to go be dogshit at cricket ? https://t.co/ffetO9IQXi

What is so boastful about being in anything? You are a rajput boy by chance, Indian by chance. None of them you had any control over. https://t.co/yRp1EpxoNK

These crickets have so much influencing power, especially towards the youths. And see what they are injecting. Taking pride of caste? While also, shamelessly combining it with nation & nationalism.

The C in CSK stands for casteists :3 https://t.co/cRObZWdjo9

Embarrassing himself again and again. Why include jai hind for a caste pride tweet? That legitimizes the tweet somehow? https://t.co/xB89d6h2bP