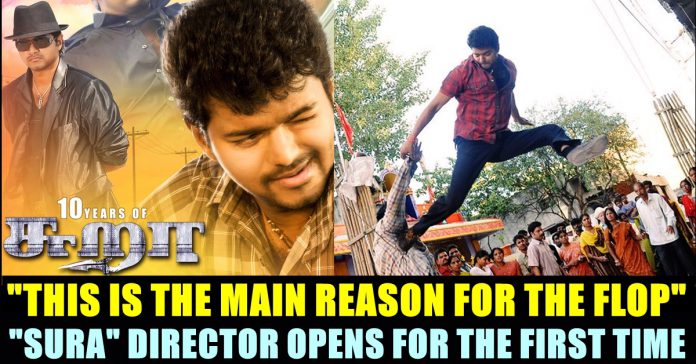 Vijay’s 50th film “Sura” marks the 10 year anniversary on 30th of April, 2020. In a way of celebrating it, fans of actor Vijay are trending hashtag “10 Years Of Sura” in Twitter. The film which was directed by S.P Rajkumar became a box office dud during its release time. Now, on this special day, the director who is currently directing serials for SUN TV opened on why the film didn’t do well as he expected.

The story of “Sura” revolves around a young fisherman who fights against a influential minister to save the lands of his fellow fishermen to build houses for them. Tamanna acted as Vijay’s love interest and actor Vadivelu led the comedy track of the movie. Though the film failed to impress audience, producer Sangili Murugan reported to media that it recovered the budget through satellite rights. The film garners huge viewership whenever it gets telecasted in Sun network, according to reports.

Now, while talking to media about his film’s result, director SP Rajkumar has said that he and Vijay were very much confident about the film as it received good reviews from Malaysia where it got released at first. “But I don’t know what happened next. Negative comments started to surface among audience. A huge number of people worked against Vijay sir at that time. They destroyed my career in that process. They worked hard to make the movie flop. That particular team is one of the main reason for the flop of the movie.” said S.P Rajkumar who is currently involved in preventional works of Coronavirus in his hometown.

“Even Producer Oscar Ravichandran watched the movie and appreciated it. I never expected such result. Sun Pictures bought the film without watching and did huge promotions.” he added. “Vijay Sir hugged me after watching the film and said “Nalla irukku nne”. He had a huge confident in the film. Many commented that Vijay’s intervene while filming ruined the film. But nothing happened like that. He gave me full freedom. He celebrated the film more than me. I truly regret for the film’s flop as it was his 50th film. He could have felt that he made a wrong choice by choosing a small time director like me to direct the film” said S.P Rajkumar who was supposed to write story and dialogues alone for film initially. He ended up directing it due to Vijay and Vadivelu’s request. S.P Rajkumar worked as a comedy track writer for Vijay-Chandrasekhar films such as “Once More”, “Nenjirukkum Varai” etc.

“The choice of Villain went wrong in the film. I could have chosen someone equal to Vijay. It is a mistake I committed. But Vijay Sir didn’t make one single complaint till today. If this film performed well, i could have directed many more big films. My lifestyle would have changed. To be frank, once Ajith sir came to our shooting spot while shooting for “Asal” nearby us and Vijay sir introduced me to him by saying that I have many good stories. I dreamt of making a film for Ajith but it is lasted only as a dream. I faced many disappointments after this film’s flop. I never went to narrate story to any big hero as I know how they would respond. Now I am planning to do a film for R.K Sir and currently doing serials for SUN TV” he said.