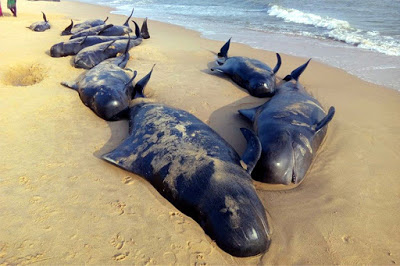 What happened to the whales in Tamil Nadu?
About 81 short-finned whales had beached near Mandapu village since Monday evening. The area is around 600 km south of Chennai in Tutucorin district. Fishermen battled hard to try to put them back into the water in vain.

The administration is investigating into the cause of such large scale stranding of whales. Initial reports suggest Earthquake to be the most plausible reason.

Former director of Zoological Survey of India, K Venkataraman has said “On Monday, an earthquake with a magnitude of 6.5 on the Richter scale and another one measuring 6.9 on the Richter scale were in the Philippines and Indonesia, respectively. These could have disoriented the whales.”

Why do whales strand onshore?

Whales behave strangely when they become weak, contract disease, when their usual migration patterns get disturbed when their ecosystem is invaded and for many other causes listed below. Once faced by the below-mentioned interference, the whales which moves in pack gets disoriented and eventually ends up getting stranded onshore only to die.

2.) Stranding happens when the whales contract any diseases, if they are weak and hence they let the waves take control of these majestic swimmers.

The collision of ships, fishing nets injuring them, pollution of the ocean water, change in temperatures of water due to release of industrial effluents, sound of ships, usage of sonar devices in the ocean.

Where else has it happened?

It has happened in multiple locations across the world including California where whales have got stranded and died. The stranded whales do not return to the waters as if it is on a suicidal mission. In almost all the past instances the whales which got stranded to the shore have died on the shore.

Some of the countries where this phenomenon is common includes:

1.) New Zealand – Hundreds of pilot whales died by stranding on the shores of New Zealand. The reason cited being the underwater sonar systems used by the military which disorients the whales and send them on a suicide mission.

2.) South Africa – Hundreds of killer whales had stranded on the coast of South Africa in 2009. Both in New Zealand and South Africa, the whales were given euthanasia to reduce their prolonged sufferings.

According to Marinemammalcenter.org, these are the steps to be followed in case of stranding of marine organisms

1. Don’t touch and do not pick up, pour water on or feed the animal
They are wild animals and can bite. They also are easily stressed by humans.

2. Do not return the animal to the water
Seals and sea lions temporarily “haul-out” on land to rest. Harbor seal mothers often leave their pups ashore while they’re feeding at sea. A beached whale, dolphin, or porpoise should be reported immediately.

3. Observe
Observe the animal from a distance of at least 50 feet. Keep people and dogs away.

4. Describe
Note physical characteristics such as size, presence of external earflaps, and fur color. This helps us determine the species, what rescue equipment, and volunteers are needed.

5. Condition
Note the animal’s condition. Is it weak and underweight? Are there any open wounds?

7. Location
Determine the exact location of the animal in order to provide accurate directions. We cannot rescue an animal if we cannot find it!

8. Call the nearest wildlife office who are trained to handle such a situation.
A detailed study required

All the coastal countries more particularly the countries which has witnessed stranding of whales should come together to sponsor a joint study that can confirm the reasons for the whales stranding onshore.

The Logical Indian commends the valiant efforts of the fishermen who tried to save the whales.

It is quite evident human interference is a major cause of whales stranding and dying onshore. Presence of military equipment which uses sonar, dumping effluents & other substances which causes temperature changes & kills fishes which are potential meals for whales should be avoided. Judicial usage of fishing nets & careful navigation of ships should be prioritized.

The CRZ regulations should be enforced in its word and spirit. Natural calamities like earthquake also cause this phenomenon, however, we as a society could and should do our part in safe guarding the marine ecosystem.