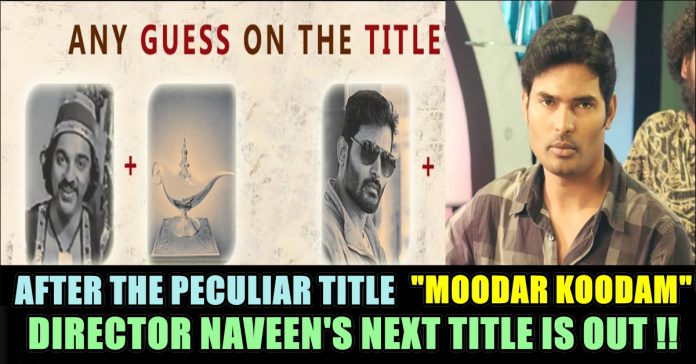 Director Naveen, who received critical acclaim for his intelligent writing and screenplay in his black comedy Moodar Koodam where he also played one of the lead roles, has revealed his next Movie’s title which seems gives enough clue for the genre of the movie. Naveen was born in Kavundapadi in Erode District. He began his career as an engineer and worked in EID Parry and Glaxo Smithkline, Delhi. Later, Naveen joined Chimbudevan as an assistant director and worked in films like Imsai Arasan 23-aam Pulikesi. He worked as an associate director for Pandiraj’s national award-winning film Pasanga. When Naveen narrated the script of Moodar Koodam to producers, many rejected, some wanted corrections and many questioned the narrative style. So he decided to produce the film on his own and launched White Shadows Productions which is the banner of this film also. Director Pandiraj (of Pasanga movie fame) distributed the movie through his production house. Moodar Koodam was critically acclaimed and Naveen was appreciated for his screenplay, direction, and dialogues.

Today Pa. Ranjith released the title look of the film in twitter at 6 pm on social media. This film features Kayal Anandhi in the lead role. It should be noted that director Naveen is already committed to Vijay Antony for a film, which will be his third venture.

Check out the title of teh film below :

On releasing the title Director Naveen said “Wen is ur next movie?’ Is the question I’ve been facing for a very long time. Happy it’s been answered to the world thru @beemji Thnx for the honour thozhar. #AlaudhininArputhaCamera Is my next. Coming soon”

‘Wen is ur next movie?’
Is the question I’ve been facing for a very long time. Happy it’s been answered to the world thru @beemji
Thnx for the honour thozhar. #AlaudhininArputhaCamera
Is my next. Coming soon https://t.co/ZjKEWXOR8Z

What do you think on the title ? Do you like it ?