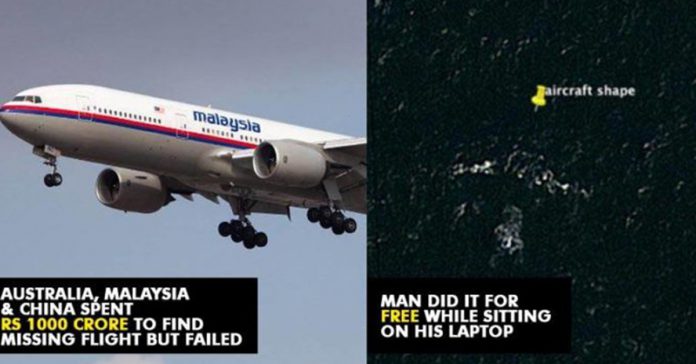 A man claims to have found the missing passenger plane MH370 on Google Earth after its disappearance four years ago. The flight, which was carrying 239 people, was travelling to Beijing from Kuala Lumpur on 8 March 2014 when it disappeared above the Indian Ocean.

It was believed as one of the most mysterious incidents of all time. Australia, China and Malaysia invested and ended with an unsuccessful £115 million search in January 2017 which is equal to 1000 crores of Indian currency. Peter McMahon, an Australian mechanical engineer who claims to have worked in crash investigations for more than 25 years, insists he has discovered the plane. He says he’s spent months carefully looking over images from NASA and Google Earth to try and pin point the missing craft. This 64 years old Man has pored through NASA and Google Maps images since the plane disappeared and points to Round Island, north of Mauritius.

McMahon told Daily Star Online: “Four Americans were sent to Australia to oversee the findings of MH370. He also told the news outlet that authorities don’t want the plane found ‘as it’s full of bullet holes’, so by announcing its discovery they will be forced to open a fresh inquiry.

McMahon says authorities “do not want it found as it’s full of bullet holes, finding it will only open another inquiry”. In 2015, a wing flaperon washed ashore Reunion Island, off the coast of Africa. Investigators confirmed the piece was almost certainly from MH370. Another piece of debris was found on the coast of Mozambique last year and that was also likely to have been a part of the plane.

Along with the main section, he claims to have found part of the front cabin south of Rodrigues Island, also near Mauritius.

Ghyslain Wattrelos, who lost his wife and two children in the tragedy, also believes the plane was shot down.

He believes Vietnam, Malaysia and Thailand could be withholding vital information.

Ghyslain said: “All the military from these countries have seen the plane, if we believe that version. Why are they silent?

“I do not know, but there are also other countries that have information like England with Inmarsat, with Rolls-Royce, like the United States with Boeing and like the FBI who went the next day and took the pilot’s flight simulator and never said anything to the investigators.

“Why this silence? There is something we do not want to say in this story.”